The Monuments of Paris – Le Sacré-Coeur 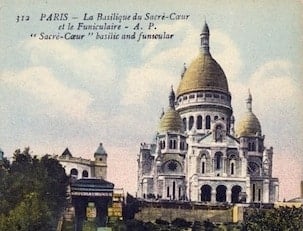 The trip from the Moulin Rouge to Sacré-Coeur is a journey from sinners to saints!

The Sacré Coeur Started With a Vision

In October 1872 the Archbishop of Paris was said to have had a vision while climbing the stairs of Montmartre and decided that there, “where the martyrs are,” is where the Sacred Heart Basilica should be built.

But Sacré-Coeur was not the first sanctuary on this hill overlooking Paris.

The Druids prayed there, the Romans built a temple to Bacchus there, and Montmartre (literally martyr mountain) was named after St. Denis (the patron saint of Paris) who was beheaded there while trying to convert the Gauls. But—martyr that he was—the loss of his head didn’t stop him. He simply picked it up and walked out of town, delivering a sermon along the way.

Why Is The Sacré Coeur So White?

Covered in travertine, a self-bleaching stone which therefore remains white, this Romanesque-Byzantine bonbon contains one of Europe’s largest mosaics, has the world’s heaviest bell, and, from the dome, provides one of the greatest views of Paris.

“The Basilica of the ridiculous.”
—Emile Zola 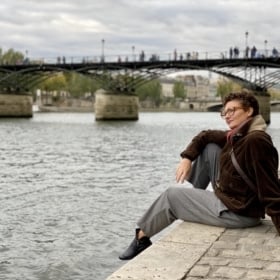 How Do French People Dress In Paris? 👖👗