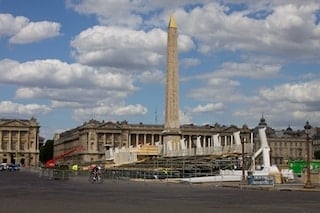 If you want to experience Bastille day in Paris, then, that’s obviously be the best time for you to go!!! For all others “regular tourists”, take my advice and avoid that time of year if you can… this is why.

Before we start just a reminder it’s not called Bastille day in France but “le quatorze juillet” or, less often, “la fête nationale”.

If you say “Jour de la Bastille” while in France, you will get some strange looks!

Every year, le quatorze juillet starts with the very traditional “Défilé” (the military parade) in the morning.

The défilé showcases not only 1000s of military, police, firemen and supporting personnel but also horses, tanks, helicopters, fighter jets and more.

The parade starts at the top of the Champs-Elysées and ends in front of the president’s tribune on the Place de la Concorde, so to accommodate the millions of people who come to watch the parade, most of the lower Champs-Élysées are outfitted with stadium-style seating and the rest have crowd control barriers.

In order to prepare for that, worker crews start the installation many days before and it takes them more than a week to remove them completely.

Needless to say that you won’t enjoy the scenery the same way.

3 – Huge Concert Under the Eiffel Tower

In the evening, the city of Paris puts together a massive free concert.

Then finally the day ends with the fireworks which are usually fired near the Tour Eiffel and even more, people show up for that (look for my next post on Paris’ Bastille Day fireworks secret spot, avoiding having to sit out for the whole afternoon).

As you can imagine, Paris is transformed to be able to accept the millions of people who descend on the Champs-Elysées, the Champ de Mars and anywhere in the city where there is a clear view of the Eiffel Tower.

Restaurants are crowded, hotels full… Busy streets are full of people partying at night, some being just happy, some being drunk.

On top of that, some Métro stations are also closed on that day and combined with the number of people traveling into the city, taking the Métro can become quite an ordeal.

In conclusion, if you want to experience our big “fête nationale” and party with the French, you’ll have a blast and a unique memory. However, if you are a regular tourist and want to see all the famous Parisian landmarks in their ‘natural’ state, then try to avoid Paris for those 2 weeks!

The video below is from the 2007 Défilé