Freedom is Never Free – The Story of Caen During WW2

Frank shares with us his personal and touching memory of a chance encounter in Caen, France, as he was visiting the city which suffered so much during World War 2.

The tap on my shoulder startled me. It was the last thing I expected as I stood alone before the ancient Catholic church in Caen on this June day in 1994.

My wife and I were in Normandy to celebrate the 50th Anniversary of the liberation of France. However, at the moment she was in search of Hermes scarves, so I decided to wander the city alone.

Table of Contents
Unexpected Encounter in Front of the Caen Cathedral
A Devastating Attack on Caen
A Population of 60,000 Bombed Down to 17,000
A Lunch With the French
WW2
Systematic Bombing

Unexpected Encounter in Front of the Caen Cathedral

I turned to face an impeccably dressed elderly woman, a beautiful scarf draped about her neck and shoulders. She was to tell me that the Hermes scarves were for visitors with money to donate to the economy; hers was just as pretty at a third of the price!

She smiled and asked in French, “Are you Catholic”. I told her I was and she proceeded to tell me about the church that we were now viewing.

It was the only church, Catholic or otherwise, that had survived the devastating spring and summer of 1944, the time of Le Débarquement, that included British General Bernard Montgomery and his 3rd Infantry Division driving inland from Sword Beach to retake Caen from the Germans on D-Day, June 6.

But this was not to be an easy conquest. Instead of capturing the city in a day, Monty spent months hurling rockets and bombs against and onto the city, its French inhabitants, and its German invaders.

A Devastating Attack on Caen

This persistent and devastating attack turned the city into rubble. Each pile of crumbled stones and bricks from destroyed French buildings and homes, rather than making the enemy easier to eradicate, instead created another defensive barricade for the invading Hun.

Not to be deterred by German resistance, Monty persisted in his determination to destroy the rats investing this house of Caen, even if that meant destroying every house and every French occupant along with the infesting vermin.

It was a breezy spring day and Adeline suggested a tour of the immediate city. As we walked she told me of that horrendous time and the terrible memories from her childhood that still haunted her.

Every evening, when fighting would cease at sundown, the townspeople would walk from one pile of rubble to another. Someone would climb to the top and lay flowers for those crushed within while the rest prayed at the foot of the debris. Then the group would move to the next pile and repeat the ritual. It was a solemn nightly procession honoring those innocent people caught in the crossfire. There was no way to know who was buried under the debris.

Adeline told me “it was up to God to separate out the prayers, giving some to any good Germans buried with her friends and family members, but none to Montgomery to help him persist in this destruction”. Her loathing for the man was palpable.

He had bombed her beautiful city of 60,000 to a population of less than 17,000. The rubble had blocked escape routes for the French people and had prevented ambulances from getting to the wounded. The suffering was incalculable. The cathedral of Caen and the University of Caen, dating to the 15th Century, were both leveled by the bombardment. Caen was eventually rebuilt but the process took from 1948 to 1962.

Was this massive destruction necessary? Adeline and her friends have no doubt that it was not, a belief shared in articles in the local papers on that memorial day.

It seems that only 300 Germans were holed up in the center of Caen, while the bombardment directed at Montgomery’s troops came from the area surrounding the town. A bit of miscalculation resulted in an ancient and magnificent city destroyed and thousands of innocent people killed.

A Lunch With the French

Adeline and I had lunch in a pleasant bistro. Despite using my best French the waiter’s eyes lit up with excitement as he said, “You are an American. Wait one minute, please!”

He returned beaming with pride, carrying a single, small ice cube which he plopped into my cold tea giving it a French “icing”. “That’s not too much, is it?”, he asked.

It was a slow day in the bistro and the waiter and Adeline were friends, so he joined us at our table. He echoed her thoughts about Montgomery. “You know”, he emphatically added, “the British destroyed our fleet at Mers-el-Kébir on this day in 1940! They killed 1,300 French sailors just to keep the ships from falling into the Huns hands. Some allies! The Americans would have never done anything like that to us.” I chose not to enlighten him to the contrary. 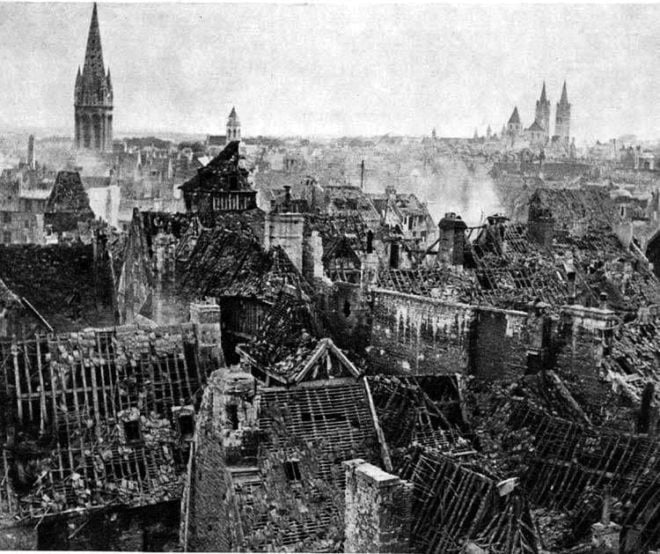 The Americans entered WWII in November 1942 as part of Operation Torch which eventuated in driving Rommel and the Germans from North Africa.

Stalin had long been screaming for a direct cross channel attack onto the French mainland so as to create a second front for Hitler and in so doing take the pressure off his embattled country.

Churchill and Roosevelt finally agreed but put off the operation for two years, until such time as they had an overwhelming air advantage.

In the meantime, the allies re-took Sicily and Italy. Churchill had his eyes on the Balkans but finally agreed to attack across the English channel and strike the Normandy beaches.

By the spring of 1944, Rommel had taken over the development of Hitler’s Festung Europa, his Atlantic Wall that stretched from Spain to Russia. However, far from being impregnable, it was poorly fortified and vulnerable at many locations.

Not only did it “lack a roof” making it vulnerable to bombing, as Churchill had pointed out, but it lacked fortifications of every variety. Rommel was able to fortify primarily the areas in Normandy, Pas de Calais and Norway.

A bombing committee including members from all allied countries was convened under England’s Air Chief Marshall, Leigh Mallory.

In order to keep the Germans from suspecting the site of the Allied attack it was decided to undertake a wide-ranging, systematic bombing campaign to destroy the entire French railway transportation system throughout Northwest Europe.

The Allies believed this was necessary to keep the Germans from speeding reinforcements to Normandy and sealing off the beachheads. So widespread was the bombing that it was impossible for the Germans to draw conclusions from the selected targets as to the intended site of the invasion.

Churchill opposed the bombing fearing a massive slaughter of French civilians would ensue.However, when Maj. Gen. Pierre Koenig, the commander of the Free French forces in the United Kingdom stated “This is war and it is expected that people will be killed… We would take twice the anticipated loss to be rid of the Germans”, and when the usually cantankerous Charles DeGaulle agreed with him, Churchill acquiesced and the Transportation Plan was set in motion.

This plan while highly successful and accomplished all that it was intended to accomplish, resulted in the loss of 2,000 aircraft and 12,000 airmen. By the end of the Normandy campaign in August 1944, 28,000 airmen had died.

The Transportation Plan resulted in 50,000 French civilians killed and over 100,000 wounded. Nearly 900,000 homes were partially or completely destroyed.

The French citizens of Caen present this night all agreed that while devastating there was no other way to liberate France, and sadly accepted this carnage.

It is estimated that fifty million people were killed in World War II, more than half of whom were civilians.

Freedom is indeed not free. It comes with a heavy price tag.

Adeline and I continued a correspondence for several years. She would send me articles in French newspapers about aspects of WWII and I would send her items from America, including some scarves which she told me she treasured.

She was particularly fond of the one adorned with an American flag. It reminded her of her friend from America whom she had happened upon quite by accident looking lost standing in front of an old church in her beloved Caen.

Then one day, after a longer than usual lapse in communication, I received a brief, handwritten note bearing no return address and simply telling me that Adeline had died.