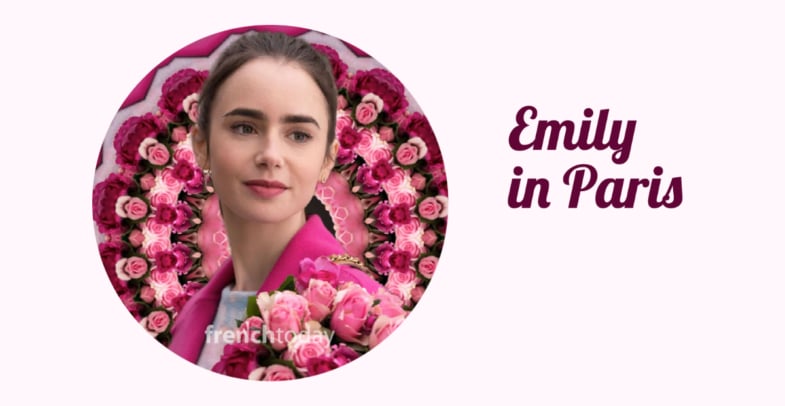 I heard about the Netflix series Emily in Paris on social media. Many people seem to make fun of it, or dismiss it for its stereotypes.
I’m loving it.

What a breath of fresh air in this difficult time.

And we can all use a little bit of fun right now, don’t you think?

One of the first thing I love about Emily in Paris is that the cast is French. Really French. You have no idea the number of supposedly French characters in movies/ TV series… who are not French at all! And when they speak French, it’s a disaster.

Here: no doubt, more than half of the cast is French.
And they use a normal way of speaking: it’s not too slang, it’s not overly enunciated, the dialogues are realistic. Their accent and way of pronouncing the modern French language is the real thing.

The series takes place in the fanciest parts of Paris. Many people didn’t like this, but I’m enjoying it. If I’m going to see a series about Paris, I’d rather have it feature Le Marrais or the 6th arrondissement rather than Barbes…

The series sells a dream: the dream of a young American woman making it in Paris. So her life ressembles more the life of a very wealthy tourist in Paris than the life or the common Parisian. And as far as I’m concerned, it’s OK.

Did you watch the series Sex in the City?
Well, there’s kind of the same vibe: the girls are always dressed in couture, strolling the paved streets of Paris on their 10 inch high-heel shoes (total respect for the actresses…)

Dont’ get me started on the next door neighbour who’s hot as hell, and always home (which is far from being the life of a chef)…

However, would I rather see an average looking Frenchman playing the role? Nope. It’s fun to watch beautiful people live beautiful lives in a beautiful city…

And a nice change of pace from the news lately… As I write this article in November 2020, we cannot travel because of the Covid-19 crisis. The shots of Paris are absolutely gorgeous and are going to make a lot of people dream of Paris.

So yes, of course, Emily in Paris is a bit of a fairy tale… But a lot of the show is actually very well researched.

In the Netflix series, young and peppy Emily is sent to Paris to represent “the American point of view” at a large client firm.

And she does it perfectly.

She’s a candid eye, a totally blank slate: she has not done her homework about France or the French people and can hardly speak French.

Emily has everything to learn about the French, and watching her trying to navigate her way through the cultural differences and French language traps is certainly a big part of why the series is so much fun.

However, the writers behind the series certainly did do their homework.

As I’m watching the series, there’s so many times that I’ve asked myself: did they read my blog? Are they familiar with my audio novel set in Paris? (If they did, I sure could have used the credit…. It’s not too late!!! LOL !!!)

In this novel, I actually tell the story of a couple who goes in Paris for a vacation. It’s full of useful French vocabulary but also tips and in-context cultural remarks.

And the same thing happens in the series. I actually found Emily’s observations, faux-pas, surprises… to be really accurate, and not overly exaggerated.

Here are some of the cultural differences highlighted by the series:

Of course, there are also many exaggerations, and I can understand why the stereotypes may rub some people the wrong way.

Yet Emily in Paris is not a documentary on the lives of Parisians… It’s a cute Netflix series, a fun and enjoyable chick flick (I’m saying this in a good way), with plenty of romances and drama. I don’t think it has the pretension of being much more than a Paris fairy tale.

4 – Can You Learn French With Emily in Paris?

As I said above, the show is loaded with current French expressions and good language remarks. And the cast is French.

Although the aim of the show is not to teach you French, you can certainly learn some useful French slang expressions in the show. Plouc (hick) comes to mind – LOL.

Now, if you are going to mimic somebody on the cast, maybe don’t mimic Emily. She is a foreigner in Paris. It’s the appeal and the joke of the show. She’s had no previous French language experience, and although she is learning during the series (and progressing), she’s bound to make mistakes, mispronounce things. And it’s OK.

I like that she smiles a lot. Lots of people will tell you not to smile in France, and I find this advice ridiculous. Everything is always more pleasant when one smiles. I noticed that most of the time, she is very polite: she says “bonjour“, “s’il vous plaît” and “merci“… Which is really the bare minimum.

I’ve seen many YouTubers analyse everything Emily does wrong… What’s the point? Once again, the show never claimed it was going to teach its audience how to behave in Paris, or how to be the perfect Parisian… So I think criticising her every move / word is beside the point.

Now, let me share with you something else I like about this series. Something much more personal.

If you know me, you know I lived in the US for 17 years. In Boston. That’s where I met my – also French! – husband Olivier. That’s where our daughter Leyla was born. The three of us actually became US citizens.

So Boston was a huge part of my life.

But above everything, that’s where I found my true self.

It can be hard: you can’t really represent yourself through the language, you keep making a fool of yourself… and it can be quite lonely too.

But it’s also exhilarating! You have everything to prove to yourself. And there’s nobody else to embarrass but yourself. By this I mean nobody knows your family or your friends, so you can reinvent who you want to be.

Because you have nothing to loose, it’s also easier to be bold and take chances.

I dressed to the nines – I can still picture it: I wore a skirt suit which was a Chanel rip-off, beige suede pumps, pearl necklace, my hair was in a loose bun – and I entered every luxury shops of Newbury street, asked to talk to the manager and pretended I had some retail experience back in France.

I also offered to work for an afternoon for free, so they could see what I could do.

After refusing positions at Chanel and Hermès, I chose to work in the most prestigious wedding store of Newbury Street called “L’Elite”.

I had no previous experience in sales. I spoke French, English, a bit of Spanish, and I was hard working, and a fast learner. And there was no stopping me.

For the late afternoon and evenings, I found a nanny position. Daniel was the sweetest five-year-old you’ve ever met.

Three times per week, I’d leave the store early, pick him up from his school on Exeter street, and we’d walk to his house on Beacon Hill, playing in the Boston Common on the way – en français bien sûr.

It was not far, yet still a long enough walk for a five-year-old that he needed a pee stop… So every time, we stopped to use the facilities at the Ritz-Carlton.

Can you imagine? A young woman and a little boy stopping several times a week at the Ritz to use the restrooms? After a while, I made a point that young Daniel say “merci Monsieur” to the concierge who certainly would end up noticing us… He always greeted us with a smile. Although he knew perfectly well we were not customers, he never stopped us.

I was fearless. The city was mine. Nothing was too good for me or out of my reach.

I don’t think I was particularly pretentious; I was just ready to seize any opportunity.

I was also very positive, young, a bit naive… I had the French “je ne sais quoi” and for some reason, people were kind to me, and ready to take a chance with me. And me with them.

And I find exactly the same vibe in Emily in Paris.

The series got a lot of bad press for this. Emma Gray from Huffpost stated “there’s not much to the character, except for enormous amounts of self-confidence and the inexplicable ability to attract new friends and love interests on every street corner.”

Well, I believe it. I lived it. And I loved it.

Of course, I was never dressed in couture. I didn’t go for lunches at the Four Seasons, never did shop at Chanel or Hermès… Money was tight for me even though I was hanging around the fanciest part of town. And I didn’t meet nearly as many suitors as Emily does! But I did meet my husband. And he’s the love of my life, has been for over 25 years.

What do you think? I’d love to read your input! Do you enjoy the series Emily in Paris? What situation struck you as real or fake? What did you especially like or dislike? Have you ever experienced anything similar? Please do share!