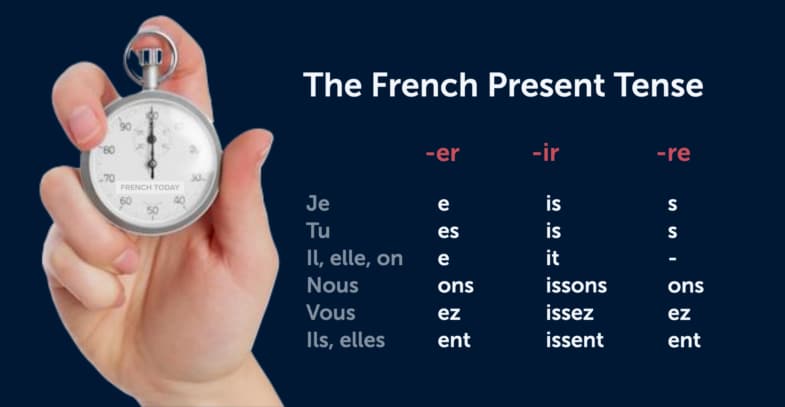 Learn the French present tense verb conjugations with audio recordings. 90% of French verb verbs are regular -er verbs; the -ir and -re verb groups are not all regular.

The present tense is the most common tense in everyday conversations.

Furthermore, when you conjugate French verbs, you often use a present verb form as a basis and then add another tense endings to that basis.

For these two reasons, it’s essential you know the present tense of your French verbs inside out.

Since most students learn their French verb conjugations from books, they often butcher the verb pronunciation… This free lesson comes with audio. If you’re learning French to speak French, the pronunciation is more important than the spelling!

How To Conjugate the Present Tense in French

To conjugate a verb in the present tense in French, we remove the ending of the verb in the infinitive (so the verb -er, -ir, or -re: it’s call “a stem”) and we add the following written endings to the French subject pronouns.

Play the audio recording to hear how the verb form endings sound. If there is no audio, it means the ending is silent and the verb pronunciation will end on the last letter of its stem (could be a consonant or a vowel sound)…

Yes indeed, there are many silent letters in French verbs this is why learning your French verb conjugations with audio is a must!

If you have to remember one thing of this lesson, let this be it:

Before we dig deep into the various French verb forms, let me explain when we use the present indicative in French, and compare it to English.

What is The Present Tense?

The present tense focuses on the now: it can be when the speaker is speaking, an habitual action or a general truth.

This notion is then modified by the grammatical mood. Here is an article about French moods.

In this free French lesson, we will talk about the present tense of the indicative mood.

The 4 Present Tense Forms In English

The present tense in English has 3 forms, each of them having a slightly different variation of the now:

What is Le Présent?

In French, there is only one tense to translate the four English forms.

Je parle = I speak, I am speaking, I do speak, I have been speaking.

This is often a big problem for English speakers since you use the progressive form so much in English.

You must be careful to not translate these auxiliary verbs in French “to be” (progressive form) and “do” (emphatic form), but just use the appropriate French verb ending for the tense you wish to express.

What is The Present Progressive in French?

I cannot stress enough how important this point is in French: there is no progressive form in French! We don’t differentiate the action we are in the process of doing with the action we usually do.

Now let’s study in the various French verb groups in the present tense.

Verbs in -er follow a conjugation logic based on the infinitive of the verb minus its “er” ending.

What is The First French Verb Group Conjugation?

Good news! 90% of French verbs end in -er and are perfectly regular: this means that their conjugation pattern is predictable and reliable.

Grammar methods tend to group the -er verbs in what they call the first group.

Let’s take parler (to speak) as our example.

Play the audio recordings and focus on the fact that most verb forms are actually pronounced the same way!

Since “aimer” starts with a vowel, you’ll have to apply elision (j’) and liaisons (nous‿Zaimons, vous‿Zaimez, ils‿Zaiment)

Écouter: to listen to

Chercher: to look for

As you can see a regular -er verb can end on a vowel sound if the stem ends on a vowel like étudier = étudi, or jouer (to play) = jou…

However, among this “regular” group, you will find variations of spelling and pronunciation in the stem.

So, French verbs in -ER are not always totally regular… Hum… My personal take on this is that it is a small change compared to irregular verbs which totally change spelling or pronunciation.

You need to study carefully the verbs with two stems if you are studying French to pass written exams. However, if you are learning French to speak, I wouldn’t worry about this too much at this time and consider the ‘verbs with 2 stems’ as a minor irregularity…

Only One Real -Er Irregular Verb

Let’s move on to the next French regular verb group.

Let’s take finir (to end) as our example.

Play the audio recordings and focus on the difference between spelling and pronunciation!

Guérir: to heel, get better

Way Too Many Irregular Ir Verbs

This being said, I personally don’t approve of this second verb group!

Why? Because many verbs ending in -ir in French are irregular. And this irregular -ir verbs are among the most commonly used one, such as venir, tenir, courir, partir, sortir, dormir etc…

Some grammar methods present the Ir verbs with three sub-groups.

(endings that are not recorded are silent – so they only matter when writing French!)

Ok, I get that patterns are a good thing. But so is reliability.

If you cannot rely on the fact that most ir verbs are going to follow one constant pattern, then, the ir ending is not a useful way to sort them!

My own -ir verb tip

My own tip is to recognise the possible patterns, but then learn each verb individually.

And the best way to memorize irregular French verbs is to drill – drill out-loud, with audio recordings, out of order and develop an ear for how the verb should sound.

Many methods who teach French as a foreign language include a third “regular” French verb group pattern: the verb in Re.

The supposedly typical conjugation pattern is the following:
Remove the “re” to get the verb stem.
Add: s, s, nothing, ons, ez, ent.

Now, it’s interesting to note that original French grammars do not list a third group of regular verbs. In French, the -re verbs are usually just considered irregular.

And there is a reason why…

The Re Regular Group Absurdity

Indeed, as we saw in the previous chapter with the -ir verbs, there are some patterns involved. So it is tempting to form groups.

Yet, once more, when there are more exceptions to the rules than verbs following the main pattern, how reliable a group is it?

Here is the list of suposedly “regular” -re verbs. How many would you actually be likely to use in an everyday conversation?

For fun, I listed in bold the ones I may have used in the present tense in the last week – I’m likely to have used more in the passé-composé.

That’s less than twenty verbs. 5 among them being truly commonly used in the present tense.

Now let’s compare this to other verbs that “sound” like they could be a regular -re verb because the end on a French R sound.

I raised my case.

Here are the most common irregular verbs conjugated in the French present indicative tense.

I’ve written a complete guide to conjugate être – to be in French – with 450 audio recordings! You’ll find all the conjugations at all the tenses and moods in the affirmative and the negative, and since this verb is so important, I’ve included the everyday pronunciation of être verb forms.

How to Memorize the French Present Tense?

Many students of French spend hours learning to write their verbs. And then freeze when it comes to using the correct verb form. It’s such a shame.

First, you need to understand when to use the tenses with a clear French language course with audio recordings and many examples.

Then, once you understand the tenses, you need to drill. Verb conjugations, like anything else in French, need to be learned with audio so you get the right pronunciation, liaisons and elisions with the negative or the French pronouns. 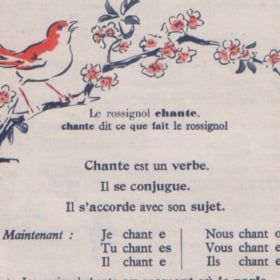