🙃 Questions in French: Inversion With Je

Asking a question in French using inversion with je is no longer common.

Je in inversion is mostly used in formal literature and deep introspection, and sometimes with “puis-je”. If you have to ask yourself something in French, use “est-ce que je”!

However, for the pleasure of it, let’s just analyze the inversion with “je”.

1 – Je in Inversion for Questions or Literary Style

Asking a Question with Inversion

Most of you are familiar with “inversion”: it’s a way of asking a question in French where you invert the regular subject + verb order. This is the simplified version… Many specific rules apply to inversion, but this is how it looks like:

Inversion and all its rules are explained in my French learning audio method “À Moi Paris level 3“.

Inversion as a Literary Style

Inversion can also be a stylistic form, with no interrogative meaning whatsoever.

You will find it mostly in literature, when writing down a dialogue:

She asked, with a serious look:
– “But at what time exactly are they getting here?”
– “I don’t know” he anxiously answered.

The “répondit-il” is not a question. It’s just “pretty” French writing. And the tense is “passé simple”, same as “demanda”, a tense we only use in literature… Oh, the joys of studying French…

So now let’s see specifically when we use inversion with “je” in French.

2 – Puis-je – A Common Inversion With Je

I’ll start with “puis-je” since this is probably the most common use of an immersion with “je” in French.

“Puis-je” comes from the verb “pouvoir” and means “may I”. It used to be the common way to ask for something:

Puis-je téléphoner ? Puis-je vous aider ? Puis-je m’asseoir ?
May I make a phone call? May I help you? May I seat down?

In today’s modern spoken French however, “puis-je” sounds very formal: instead, people use “pourrais-je”, although it’s still very formal, so we would only use it in certain situations, like… maybe for a high-end job interview… or when talking to the Queen of England (she does speak French, I checked…)

How to Say “May I” in French

So, to recap, here are the various way to say “May I” in French:

As seen above, inversion is commonly used in literature to add information to a dialogue you are transcribing. In that context, it is no longer a question, just a style, pretty French if you want.

And in that case, inversion with je is still pretty common.

Let me insist. This is used in literature. Not when writing emails or even letters… So unless you plan to write a formal novel in French, it’s unlikely you’d ever get to use it.

Using Inversion in French to ask a question with “je” is still sort of common if you are in an introspective mood… So it’s quite deep!
Here are some common inversion with je sentences:

Note all these verbs are one syllable verbs. So easy to pronounce.

So how would you ask where you should go, as in asking someone for direction when you are driving? In modern French, no way you would use an inversion with je… Here again, you’d use “est-ce que” or just the modern street way of asking a question…

To master these 4 different ways of asking questions in French (!!) I strongly suggest you check out my downloadable audiobook “Secrets of French Conversation“.

There is a specific rule about the inversion of the pronoun subject “je” with verbs ending in ER.

Actually… there are two rules!

a. Inversion of Je with ER Verbs – Traditional Rule

The “regular” rule said that with verbs ending in an E, in the case of an inversion of the “je”, you had to change the E into a É (acute accent), but pronounce it like a È (grave accent)…

The spelling reform of 1990 actually simplified this a bit and stated that since it’s pronounced È, you could write it È.

Ok, but now let’s use this in a sentence, shall we?

J’avais vraiment trop bu ce soir-là… Dansè-je (ou dansé-je… both are correct) sur la table toute la nuit ? C’est fort possible…
I had way too much to drink that night… Did I dance on the table all night long? It’s’ quite possible…

Hum… Examples don’t come easy BECAUSE WE JUST DON’T USE IT.

Aren’t you happy you read all this? Once more, inversion with je is not common in today’s French. It’s theoretically possible, but it’s not used anymore.

6 – Inversion With Je and Other French Verbs

According to the forum “études littéraires“, the inversion with je is possible with all the verbs.

However, they too agree that it’s no longer used nowadays, except sometimes in formal literature as a stylistic form.

No Inversion With Je When it Sounds like Another Word

Inversion with “je” is particularly avoided when it makes the verb sound like another word:

Now,  some inversions with “je” sound especially awful… “veux-je” for example sounds terrible to me… I’d never say that: yuck…

Inversion with je in certain cases sounds so awful that some authors just change the whole verb conjugation:

It’s important that you are familiar with inversion with “je” because you will run into it in formal French literature. However, unless you are yourself writing a formal novel in French, just stay away from it!

This is why I didn’t record the “je” form in the interrogative when I recorded my French Verb Drills series :-) 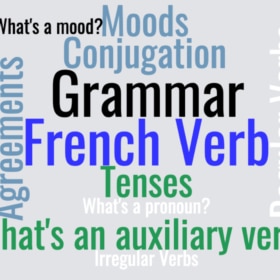