The French Seldom Use the NE Part of the Negation 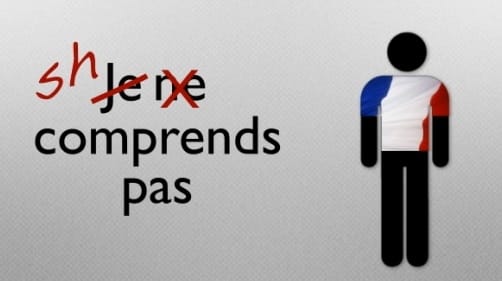 In modern spoken French, the “ne” part of the negation in French tends to disappear. We glide over it so you may hear a small “N’ sound or nothing at all.

You probably learned in school that the negative in French is formed with two words surrounding the verb: “ne” (or n’) and “pas”.

Then, you go to France, and you are shocked to never hear the “ne.”

It’s because we don’t use it. Rather, I should say, we glide so quickly over it that it disappears to the ear.

1 – The Ne Disappears in Spoken French

First, you should know that no French person today in France would say: “Je NE comprends pas” like the over-enunciated French teaching method are teaching you.

When French people speak, they are likely to say something that sounds like “Jeun compran pa”, gliding over the “ne” part of the negative.

In Paris, we even omit the “ne” altogether; the “je” becomes kind of a “sh” sound and the whole thing is pronounced “shcompran pa.”

We still write “Je ne comprends pas.” – with all the silent French letters!

This is why I often say that written French and spoken French are like two different languages.

However, when someone texts for example, you’ll see “j’comprends pas”, immitating the way we actually speak. This is not correct or proper French, and I don’t encourage you to write this way, but you’ll see it.

3 – Without the “ne” How do you Know the French Sentence in Negative?

So, how do you know a sentence is in the negative if you don’t say the “ne” in French?

You need to focus on the other parts of the negative:

that replace the pas, to understand that the sentence is in the negative.

Unfortunately, schools and recordings made for students of French don’t usually teach this modern “street” French pronunciation. They over-enunciate French, they hang on to a “prettier”, fancier and proper French language that is nowadays a fiction…

If this concept is new to you, it is essential you train on it with audio recordings featuring modern French -I highly recommend you check out my unique downloadable French audiobooks, featuring different speeds of recording and enunciation, and focussing on today’s modern glided pronunciation.