French Sex vocabulary and expressions are used all the time in movies. Books don’t cover this topic but I think it will be very helpful to adult students to understand French Sex Vocabulary, and know which words NOT to use to avoid huge faux-pas.

Of course, this lesson is intended for adults: I don’t wish to offend anybody, but there is no reason to write a French lesson about sex if you are not going to be explicit about it. I will also block the comment section for obvious reasons.

1 – How to Say to Have Sex and to Make Love in French?

The commonly used expression is “faire l’amour”, which translates perfectly into “to make love”.

There are tons of vulgar expressions about it, the most common one being “baiser” used as a verb. This means to fuck, in the physical way as well as the mental one, just like ‘to get screwed’. In that case, it is mostly used in the verb in the reflexive form: “se faire baiser”.

2 – “Voulez-vous Coucher Avec Moi Ce Soir” = Would You Like To Have Sex With Me Tonight?

Made famous by “Lady Marmalade”, this song lyric is also a very direct pick-up line.

You have no idea how many times a student naively said that to me to show they knew “some” French. Obviously they didn’t mean it. Still, it’s quite embarrassing.

So, unless you want to ask someone to have sexual intercourse, stay away from that line.

3 – French Synonyms For Having Sex – More or Less Vulgar

Here are some French synonyms and expressions for ‘making love’.

There are of course many more, but I’ll list here the most used ones, and let you know whether they are vulgar.

For more, I’ll direct you to wikipedia. Watch out though that I personally know maybe a third of the expressions listed there… So it’s fun, but not so useful.

4 – How To Say Penis in French

Here also, we have TONS of synonyms – probably over a thousand actually….

Here also, for reference, I’ll use wikipedia. But again, watch out, most of these words are NOT common.

Watch out – I often hear this embarrassing mistake: English students of French want to talk about a pine tree, and say “pine”, which as we just saw means a penis. A pine tree is “un pin” (nasal “in” sound).

5 – How to Say Vagina in French

For more, go to wikipedia.

6 – How to Say Testicles in French

“Les testicules (f)” is the scientific, but also generic term.

There are not that many synonyms, believe it or not! Most of the synonyms refer to the shape of the testicles, so “les boules” (balls), “les olives” (olives), “les bonbons” (candies), “les noisettes” (hazelnuts)…

They are usually used in the plural, but I’ll list the French synonyms for testicles in the singular so you see the gender. 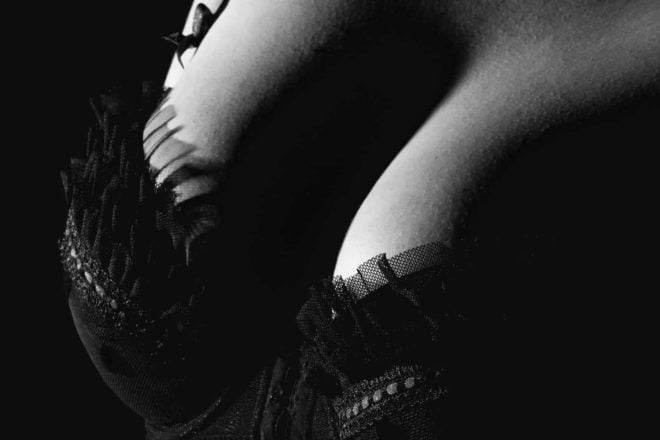 7 – How to Say Boobs in French

Back to a ton of words. “Les Seins (m)” is scientific and the most common term.

“La poitrine” refers to “the chest” but is mistaken for boobs, and often used in the plural: “les poitrines” although it is a mistake.

Honestly, we mostly use “les fesses” and “le cul”.

Watch out for the French pronunciation :

On related topics – but much less risqué – I suggest you also read: