Amener, Emmener, Apporter, Emporter, Rapporter… To Bring and To Take in French

These French verbs are confusing for English speakers because they cannot be translated from their English counterpart: to bring and to take.

When it comes to using to Bring and to Take in French, you cannot just translate. The logic is a bit different in French, so you need to think as a French person would, therefore you need to really understand the meanings of the verb, or in this case, the meaning of the “base verbs” porter and mener.

To Bring and To Take in French – Selecting the Base Verbs

The French verb “porter” means to carry, so it’s used with inanimate objects.

The verb “mener” means to lead, so it’s used with animate beings: people and animals.

Adding these prefixes to the “base verbs” porter and mener, we get:

As explained in section 1:

Unfortunately, just like in English with “bring” and “take”, you will hear many mistakes… The verbs based on “mener” tend to be used more and more for people (as they should) AND things. It’s a very common mistake, most people don’t know that rule, so it’s an “accepted” mistake.

To Bring and To Take in French – Choosing the Right Prefix

Once you have selected your correct “base verb”, the question to ask is whether :

Then, selecting the correct prefix will translate the notion of bring or take in French.

Take and Bring in English

Daniel, in an email to me says: Bring and take are about the perspective of the speaker. Merriam Webster says: bring is to convey, lead, carry, or cause to come along with one toward the place from which the action is being regarded… 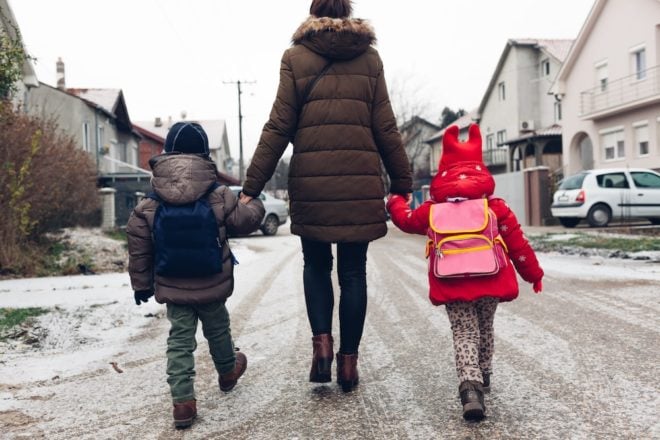 4 Examples for Bring and Take in French

Now, if you are super finicky, there are even more precise verbs that could be used:

Someone once corrected my French when I said : “c’est moi qui amène Leyla à l’école le matin” using “amener” (to take) instead of “conduire” (to drive)…

The irregular French verb “prendre” is usually translated by “to take”, as in to take a train, to take something in your hand…

It can be a synonym of “apporter” or “emporter”.

Unfortunately, translating “prendre” is not always easy since French and English don’t always match and there are many expressions with that very common French verb.

Avoid An Embarrassing Mistake With Prendre

Watch out that in French “prendre quelqu’un” has a sexual meaning, just like it can have in English.

Unfortunately, it’s a mistake I hear too often. A student who wants to say “he takes me home” may say “il me prend chez moi” and this has a sexual meaning in French. You should say “il me ramène”.

I hope I made things a bit clearer – it’s not an easy lesson. I suggest you remember the examples and learn them by heart since remembering the reasoning may be more tedious than just learning by heart in this case :-)