“Mousse de châtaigne”, “crème de marron”… if you’ve been to France, you may have run in these delicacies and wonder: châtaigne or marron, what’s the difference ?
Let’s talk about French nuts.

We’ll start by going over the French nuts vocabulary, see how we say I’m allergic to nuts in French, then dive into the French chestnut dilemma and illustrate it all with a fun “live French practice” video I shot during one of my hikes as I was on vacation in the Ardèche region of France.

Table of Contents
14 French Nuts Names
How to Say “I’m Allergic To Nuts” in French?
Nuts and Walnuts in French
Chestnut in French

First let’s see the names of the nuts in French. I’m not going to get into the controversy to know if it’s a grain, a nut, a fruit… If it has the word “nut” in it, I’ll list it there!

How to Say “I’m Allergic To Nuts” in French?

I know it’s weird, and “coque” is not your favorite French word… But you need to get your point across. I would also suggest just naming a few nut names to make the message super clear: “je suis allergique aux fruits à coque comme les noix, les pistaches, les cacahuètes”…

If like me, you only have a problem with walnut, you’ll have to be a bit creative : “je suis allergique aux noix… Enfin, seulement aux noix “noix”… les noix du noyer (walnut tree)… pas les pistaches ou autres noix…”

Please be aware that nut allergy is much less common in France than it is in the US for example, so people are much less aware of this problem, and therefore less cautious.

Nuts and Walnuts in French

Nuts as a family is “les noix”. Then walnuts are “les noix” as well… So how do you differenciate them?

Now let’s see another confusing French word: how to translate chestnut in French

We use both “une châtaigne” and “un marron” to describe an edible kind of ‘nut’: chestnut…

Well, actually chestnuts are not nuts either : they are not part of the tree nuts (almonds, walnuts, cashews) nor the peanuts family, so if you are allergic to nuts, you may not have problems with chestnuts.

All this is very confusing indeed. So let’s dig deeper.

The chestnut tree produces a fruit which is edible. There are usually several little nuts in one pod.

You usually roast them and then carefully peel the steaming hot shell off and eat the inside. In French cities, especially around Christmas time, you’ll sometimes still find people selling hot chestnuts out in the street. It’s one of these very old traditions.

Now, chestnuts have been cultivated and selected to produce one single larger fruit. It’s then called “un marron”.

So now let’s complicate everything a bit… There is yet another kind of fruit, quite similar to the chestnut, but poisonous. It’s called ‘a horse chestnut’ in English, “un marron d’inde” in French, or “un marron” for short.

And the plot thickens.

Imagine how confusing this is to French kids… They play with cute brown and round “marron” in the schoolyard (“les marronniers” are very popular trees in France with their tall white or pink flowers) but then are told to be careful because they are poisonous. And then back home, for desert, they are handed “de la crème de marron”… 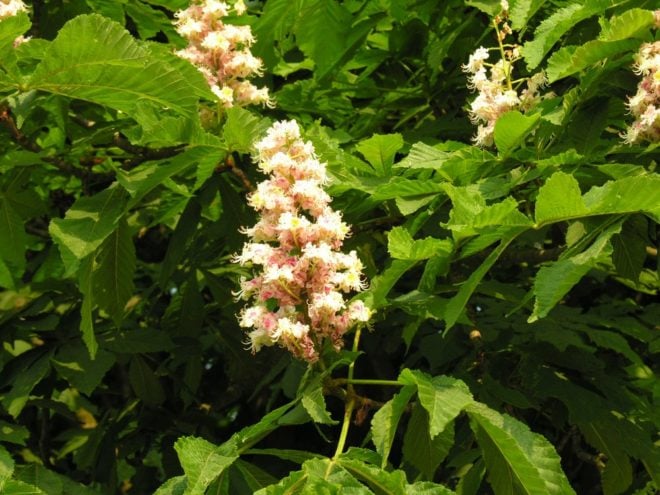 When I was on vacation in the Ardèche region of France, there were chestnut trees (“des châtaigners”) everywhere. This region is famous for them and produces a lot of chestnut products.

So during one of my walks, I improvised an “everyday spoken French” video – check it out, turn the CC on if you’d like (bottom right CC option and then choose between French and English with the wheel).