How Can I Learn French By Myself? My 6 Tips 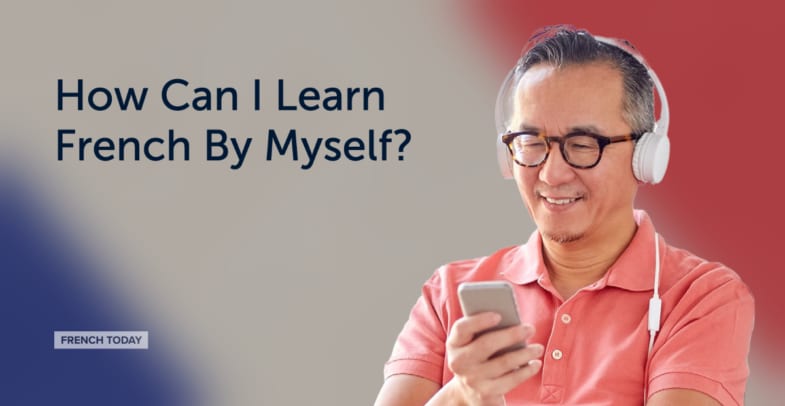 Although self-study is not for everybody, you probably can learn a lot of French by yourself. How? Follow my 6 precise tips.

Many students wonder: can I really learn French by myself?

Some people do, and succeed.

Others spend years self-studying French, but don’t feel they’ve progressed much, and still have a hard time carrying on a conversation in French.

In this free French lesson, I’ll tell you precisely how you may be able to successfully learn some French by yourself, and when it may be useful to actually reach out to someone else.

Table of Contents
1 – Can I learn French By Myself?
2 – How Can I Learn French By Myself?
1 – Study French A Bit Everyday
2 – Beware Of Being Side-Tracked
3 – Follow A Structured Approach
4 – Pick The Right French Method For You
5 – Don’t Multitask
6 – French Is Essentially A Language Of Communication
3 – Conclusion

I’m not going to lie to you: self-studying French doesn’t work for everybody.

I know it’s not politically correct to say it. I know many online sites will claim “learn French fast with my unique method”… Oh well… I’m not one of these.

I’ve been teaching French to adult English speakers for about 25 years now. I’ve taught all sorts of French students, and the truth is: when it comes to learning a language, not everybody is equal.

To some lucky people, learning French comes easily. Their brain is like a sponge, they have a good “ear” for languages, and progress smoothly in French.

And some people are not so lucky. They struggle to accept that French is different from their own language. French pronunciation may not come easily to them. And they have a hard time memorizing the various French verb tenses.

So, if you are someone who gets languages easily, then you may very well be able to study French all by yourself.

If you struggle with French, then I suggest you seek the help of a French online tutor, or at least follow a proven French learning method which will guide you through your French studies.

Which brings me to my next point.

2 – How Can I Learn French By Myself?

You believe you are a good candidate to study French by yourself. Good for you!

However, the successfully study French by yourself, here are some important pointers.

A key element to succeed as a self-student of French is consistency: I suggest you set a studying schedule for yourself and stick to it.

Don’t over do it. It’s better to study French thirty minutes per day and stick with it in the long run than set an unrealistic study time goal and stop after a few days.

Like with everything else, it’s starting the routine which is really difficult.

2 – Beware Of Being Side-Tracked

I know what I’m going to say next is not going to be very popular… But everything in life cannot be fun. If you are serious about studying French, it’s going to take work. Hopefully, it will also be fun – but it cannot be all fun!

It’s tempting to watch entertaining YouTube videos after YouTube videos, or even worse if you ask me – French language lessons on Instagram… It’s fun alright but is it serious?

To master French, you do need to understand the rules which govern French grammar, but you also need practice. That means drills, written exercises… Passively watching videos is unlikely to be enough to learn French.

Which brings me to my next point: to learn French, it’s essential you follow a plan, a structured approach.

To me, this is the biggest danger of learning French by yourself. It’s easy to get lost.

Some students love a good grammatical challenge, and start studying the French subjunctive when they don’t yet master the French verb tenses of the indicative…

Other students hate grammar and will pile on lists of vocabulary but never quite master the structure of the French language.

Others will spend hours on YouTube, Instagram, Tiktok (LOL) and tell themselves they are studying French… when they are in fact barely learning anything at all.

It’s not because you are learning French by yourself that you have to do all the work! You don’t have to put the curriculum together: follow a proven curriculum, like the one I suggest in my “How to start learning French” article.

Better yet, pick a proven method, and don’t get side-tracked.

4 – Pick The Right French Method For You

What’s your French goal? Are you studying French to pass an exam? To read in French? To speak French?

How much time per day can you – realistically – set aside for your French studies?

Before picking up a French method, you need to ask yourself the right questions. Then do some research.

Here again, I suggest you read my article on how to pick the best method to learn French.

If you want to read French literature, or pass typical school exams, you may be OK with typical French textbooks.

If you want to learn French to communicate in French, then EVERYTHING (vocabulary, grammar, verb conjugations) you study with should have an audio support. Especially at the beginning, when French pronunciation is still new to you.

If you want to understand the French – and be understood by them – I suggest you follow a French learning method which introduce you to both traditional and spoken French pronunciation and language structure.

This is of course what my method offers: French Today’s bilingual novels are recorded at different speeds and enunciation, and focus on today’s modern glided French pronunciation.

You also need to question the way you are studying.

You should be able to give 100% of your attention to your French studies during your “official” studying time.

If you have to multitask, then pick “easier” things to study: for example, if you study with my French learning method, repeating a dialogue out-loud, drilling your French verbs or reviewing French vocabulary can be done while driving with the “car mode” option of our free French app.

However, I suggest you also set time aside to study with the French transcript, do written exercises and study particularly important points of grammar.

Even though I am a French method author, I believe studying French by yourself – even with the best method there is – mine !! – has its limits. Let’s see why.

6 – French Is Essentially A Language Of Communication

Most French students study French to communicate in French.

To communicate, well, you need someone to talk to.

Part of being fluent in French is of course the mastery of the French language.

Part is also the social interaction, being able to get over your natural fear of speaking, and getting over the fact that you will probably make mistakes… and that it’s OK.

To master this part of fluency, you need to interact with a real person. Even the best French learning method will “feed” you French: in my French audiobooks, I entice students to speak out-loud by including exercises and Q&A sections. I ask the questions, leave time for students to answer, then give the answer. But the student never asks me questions… I mean they may translate questions I told them to ask… But that’s pretty much the limit of the technology right now!

So, at one point or another, you’re going to have to stop studying by yourself and actually seek out a French language partner.

Can I study French by myself?

You can probably study a lot of French by yourself. But that doesn’t mean you need to do all the work.