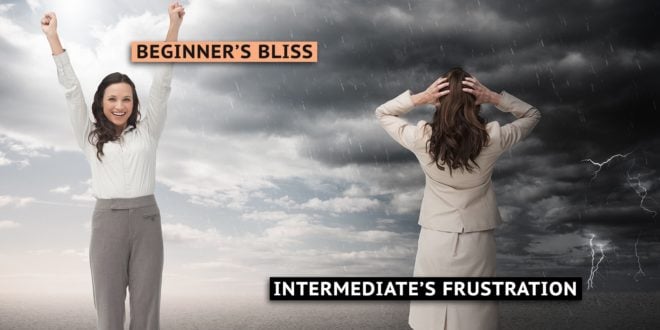 Table of Contents
Consolidate Your French Knowledge
① Beginner’s Bliss, Intermediate’s Frustration
② How To Learn French As A Low Intermediate student (Levels A2, B1)
③ Understand & Ask Questions Fast in French
④ How To Understand The French When They Speak
⑤ An Intermediate Level Student Challenge: Mastering the French Tenses
⑥ Learn Different Ways To Say The Same Thing

As an intermediate French student your goal should be:

Many intermediate speakers of French are very hard on themselves.

You are over the “beginner’s bliss” period when every new word felt like a leap forward and made you feel like a million bucks.

It’s typical for intermediate students to feel frustrated. You may even feel that your French level has regressed, that you can’t speak as freely as before. You may even freeze when you try to speak.

This is quite normal. Now that you know more French, you have higher expectations: the mistakes you make stand out to you, and it’s annoying.

You also get frustrated because more often than not, you don’t quite understand everything the French are saying. 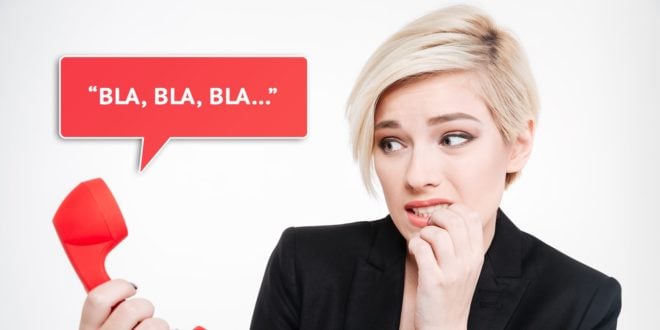 Instead of focusing on the negative, look at all you’ve achieved so far and pat yourself on the back. You do understand much more, don’t you? It’s amazing the number of things you can actually say!

You are indeed on your way to fluency, but you are not quite there yet. There are still a few steps to climb.

Here are my tips to best learn French as a self-learning intermediate student of French, learning French for his/her own benefit, not just to pass written tests.

② How To Learn French As A Low Intermediate student (Levels A2, B1)

To be able to understand more, and express yourself better, you need really dig into French grammar, and master:

The method you choose should first explain all these concepts in English, and then clearly explain how you express them in French, give you plenty of in-context examples which you could re-use in real life, and of course, drill with many exercises.

I suggest you take a look at my low intermediate French audio method À Moi Paris to master all these grammatical concepts and more, learn a lot of intermediate vocabulary and the correct pronunciation in context.

Asking questions is the base of French conversation. It’s essential that you understand questions fast, and that you are able to ask questions yourself without putting too much effort into it.

As an intermediate student, you should be able to switch between the “est-ce que”, the formal inversion and the common street French ways of asking questions with ease.

Each level of the French Today audiobook method features a recorded Q&A section to help you understand questions faster and practice your French out-loud. 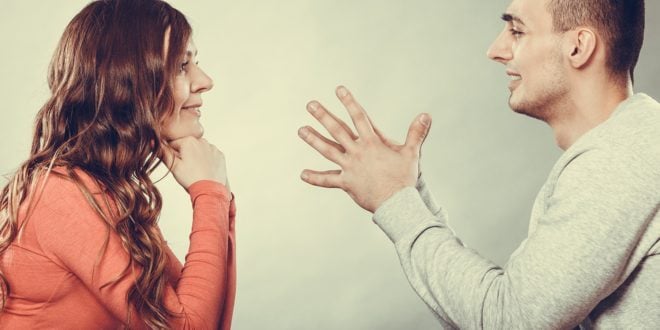 ④ How To Understand The French When They Speak

When the French talk to a beginner who can only say a few words, they slow down and also enunciate everything. As soon as you become an intermediate speaker, they sort you in the “can speak French” category, and they won’t sugar coat it for you anymore.

So as an intermediate speaker of French, it’s essential that you understand both traditional, more enunciated French pronunciation – like a typical news TV host would speak – but also the more casual French language everybody uses in a casual environment.

This means understanding idioms, some common slang expressions, even a few bad words (usually, students are already well aware of these!)

What throws them off is the fact that the French apply lots of “glidings” when they speak. For example, the “ne” part of the negation is often silent. Or “il n’y a pas de” is pronounced “yapad”.

The French word order may also be affected:

If you only studied with books, you would never know that.

Furthermore, most audio methods only cover traditional French, and feature speakers who separate every word super clearly, and would never dream of teaching the actual “street French” you now hear in France.

Therefore, each chapter of the story of my intermediate French audiobooks are recorded in 2 different ways:

Once you are familiar with your pronouns, adjectives, adverbs, questions etc… And can handle a simple yet longer interaction in French, it’s time to learn your French tenses.

Please, watch out though: learning the French verb forms before you’ve actually understood when to use the tenses is absolutely useless.

I’ve heard countless intermediate students who had no idea how to use “imparfait” versus “passé-composé”, and pretty much messed up every single verb in their sentence.

The students surely had spent countless hours studying their French verb conjugations, unfortunately, mixing up all the tenses made them really difficult to understand. It would have been much easier if they stuck with the present tense and used keywords like “last week” or “two years ago”.

So, to master your French tenses, you need to learn from a method which:

In À Moi Paris Method – Upper Intermediate, you’ll learn the French tenses of the future and the past. I’ve written this audio method with the intermediate student in mind and insisted on what is particularly difficult to understand for English speakers.

The clear explanations are illustrated by a bilingual story which really helps to understand the use of the tenses in context. With French Today’s free French app, you can easily hide the English translation.

For French beginners my advice was: “learn to simplify your sentence”, “focus on the most useful French vocabulary”…

As an intermediate speaker of French, you’re not going to be satisfied with this any longer. You need to absorb a lot of vocabulary so you can understand more, and talk about everything: no longer just say a few words to get by or show you are trying, but actually, engage into whole conversations in French.

The best way to achieve this goal is to learn French in context. When you learn vocabulary in a sentence, in the context of a story, you’ll link a whole bunch of information together: the new vocabulary, but also the prepositions, the verb, the tense you used in that sentence.

Because you imagine the scene, you’ll remember the info much longer. Learning French in context is much more efficient than learning long lists of vocabulary.

There is no better way to implement the new grammatical structures you’ve been studying and develop reflexes when you speak.

They also feature a ton of useful vocabulary, idioms, expressions… and expose you to modern French: the real French language people use nowadays.

On each of my audiobook pages, you’ll find audio samples and a table of content so you can see what is covered in the audiobook. Don’t forget our free French learning app, a great tool to study with our audiobooks on the go.

So, now that you are on your way to fluency, remember to: