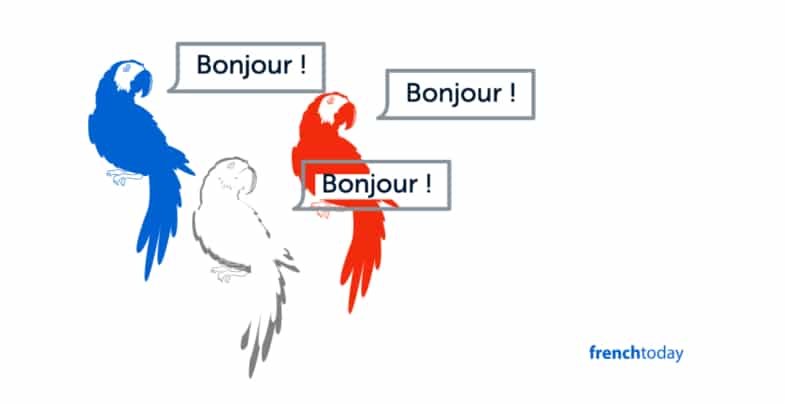 My motto is “repetition is the key”. Yet one could argue what’s the use of repetition in French if you are repeating things like a parrot? Let’s discuss.

With so many “magic” method out-there promising you’ll learn French in a matter of weeks, or while sleeping – LOL – I’d like to discuss my motto: “repetition is the key”.

Table of Contents
1 – Why Use Repetition to Learn French?
2 – Meaningful Repetition
3 – The Dangers of Translating French into English
4 – The Right Way to Learn French
5 – The Advantage of the Parrot
6 – Cutting Corners
7 – Learning From the Parrot
8 – Hesitant Versus Fluent

1 – Why Use Repetition to Learn French?

The other day, I received a message from a customer who had purchased my French verb drills. Hector was commenting on the fact that I do not include translation to the verb tenses, and this was confusing for him.

He wrote: “we still need to know the meaning otherwise we’re going to sound like parrots repeating something but we ignore what it means. It’s just not right.”

No offense to parrots: their intelligence is not what is being discussed here. However I thought this was an interesting point to address: should you learn French by repeating like a parrot?

I couldn’t agree more with Hector.

I stand by my motto: repetition is the key. But repetition with associated meaning. Meaningful repetition. And that’s exactly why I won’t include a translation to my French verb drills.

Repeating a French verb conjugation over and over if you don’t know what it means is not detrimental – you will still learn the correct pronunciation, the liaison or elision with the subject pronouns – but it’s in my opinion a waste of potential: you have found a great tool and are only using a part of it.

Before repeating something in French, students should understand what it means. Yet understanding doesn’t mean translating…

3 – The Dangers of Translating French into English

French and English languages have many similarities, and often, you can translate French into English literatlly, and vice versa.

Yet they also often differ and this is why you need to understand the rules that govern the French structure, like how to use adjectives in French, and this includes of course understanding when and how to use the French verb tenses.

More often that not, translating literally is going to lead you to making mistakes. Let’s take some examples:

To say ‘I am going to France’ we say “Je vais en France”. The verb ‘to be’ here is part of an English tense called the present progressive (to be + verb in ING) which translate most of the time into the simple present of the main verb (we don’t use “être” at all to translate this notion in French).

Now of course, don’t despair. I could list a ton of examples where literal translation does work. But if some translating, especially at the beginning, is inevitable, students of French also need to understand translating is not a safe approach to learning French.

4 – The Right Way to Learn French

So if you don’t translate, how can you ever speak French?

Well, it starts when you learn. When you are learning French, ideally, you should really put your mind into it. Associate the French words, verb tense or whatever it is you are learning with a context, visualize a situation.

Most of the time, you don’t need to go through English. Try to go “idea” to French and not idea to English to French…

Brrrrrr = j’ai froid
Not Brrrrr = I am cold = whatever you manage to say in French.

Learning French in context is at the core of French audiobook learning method. I first explain all the grammar and vocabulary points clearly, compare French to English and give many examples. Then, I illustrate the point explained within the context of a real-life like story. You will understand the rule, and that’s important, but maybe more importantly you’ll remember the story and the construction I used because you listened and repeated the story again and again.

5 – The Advantage of the Parrot

Yet why drill at all? We’ve established that if you repeat something without understanding its meaning you are somewhat wasting your time.

Yet, if you studied French with audio, you’d be at least learning the correct pronunciation. It would be a good thing if you were to mimic my voice and intonation like a parrot does.

According to her study, repeating new words creates a shortcut to access it in our brain. Meaning that when you’re looking to say ‘an apple’ in French, you should be able to find it in your memory relatively easily after having repeated the word “une pomme.” More in this article on ScienceDaily.

Unfortunately, it seems that when giving a chance, many people – myself included – will try to cut corners. It’s in the human nature to go for the easier path, isn’t it? We keep cheating ourselves: exercising without deeply engaging our muscles, dieting but treating ourselves to a chocolate ice-cream or a glass of wine (or three…), and yes, drilling the French verb forms without putting our mind into it.

My experience teaching adult English speakers for over 20 years is that as soon as I translate the verbs, many students will use the translation and will not take the time to actually study and understand the use of the various tenses in French.

If students want to successfully use imparfait or passé-composé, they need to understand and train on when to use the appropriate tense:  that’s a long process, and unfortunately I don’t have a magic solution. To give you a glimpse of the complexity, please read my blog article on passé-composé vs imparfait.

That’s why for my French verb drills, I’ve decided to not give students the possibility to cut corners. I of course explain my thought process in the introduction of the audiobook: the drills are a long-term French tool, like a dictionary: you should only drill on the tenses you have studied and understand, so you are able to drill mindfully.

7 – Learning From the Parrot

Now, let’s imagine that you didn’t cut corners, that you did spend the necessary time to study and understand how to form the verb tenses and when to use them, what would repetition bring to the table? In other words, what can we learn from the Parrot?

A parrot speaks without thinking. There is no fear of speaking, no hesitation. Add the understanding of what you are actually saying, and that’s the dream, isn’t it?

Speaking French fluently means that you don’t have to fight for it. Words, sentence structure and verbs forms flow naturally like they do in your own language. And to achieve this, repetition helps. I would dare say it’s the key!

Another customer was exchanging with me on the most efficient way to learn French. She is a musician and compared French to music.

Dorothy shared with me these words of wisdom and I will in turn let you pounder them:

“An amateur practices something until he gets it right whereas a professional practices it until he can’t get it wrong.”

There is not secret trick to learning French. Like with any other discipline, it takes work. And repetition – a smart, mindful repetition – is part of the process.