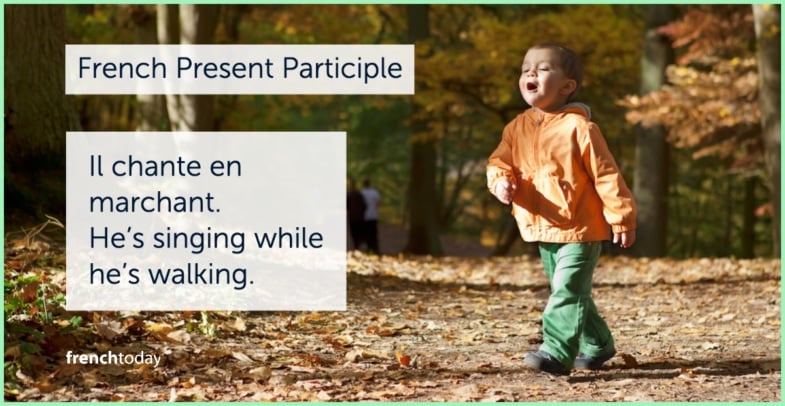 If the French present participle (le participe présent) is easy to form, it’s used much less in French than it is in English. Let me explain.

Il chante en marchant.
He is singing while he is walking.

What is this “ant” ending? And what is this “en” doing here ? It doesn’t look like the French pronoun en !!

“En marchant” is a tense: the French “participe présent”, the “present participle” in English.

1 – French Present Participle – Usage in English and in French

In English, the present participle is the ING form of a verb, and it is mostly used in the progressive verb constructions, but also as an adjective, a noun (it’s then called “a gerund”)…

In French, as repeated over and over in my audiobook series A Moi Paris, the progressive/continuous form simply doesn’t exist. We use a simple verb form (or the expression “être en train de” + verb in the infinitive)

In French, the present participle is quite rare. We use it in the following situtations:

In French, to express an action that is simultaneous with, but not necessarily related to the action of the main verb (the notions of ‘upon’, ‘while’, ‘by’ in English), we use the construction EN + verb in the present participle.

3 – French Present Participle Used as a Noun or an Adjective

To form the present participle in French, you take the “nous” form of the présent tense, remove the “ons” ending and add “ant” to it. The T is silent.

The verb stem will be the same as the imperfect stem since it’s based on the same logic (present “nous” form without the “ons”).

And of course, there are some irregular ones (only three… not too bad!)

5 – Difficulties of the French Present Participle

Let me point out things to watch out for:

A. There are no progressive forms in French.

So be on your guard when you see a verb in ING in English. This doesn’t mean you’ll have a present participle in French. You cannot just translate the verb form…. Chances are that you would actually be using a “progressive” construction in English (I am / was / will be singing…) which doesn’t translate word by word in French as I explained thoroughly in my article French mistake: watch out for the ING constructions.

Right now, I am singing = maintenant, je chante
(or maybe “je suis en train de chanter” if you really want to insist that you are in the middle of it. But don’t use it all the time you translate a progressive construction, it would sound silly in French…)

In French, when two verbs follow each other, the second one must be in the infinitive:

I love reading. “J’aime lisant” is not possible in French. So you have two possible translations:

Sentences such as “dancing is living” are tough to translate.
French would use a noun or an infinitive:

So the translation is not set in stone, it’s often a question of what “sounds” better to a French person.

Voilà. I hope this helps. If you have suggestions on how to better this lesson, please send me an email at Camille at Frenchtoday dot com, since as I said, I find it hard to explain the present participle in French to an English speaker. In my opinion, the best way is to developp a feel for it as you see it being used (or not used!) in context. 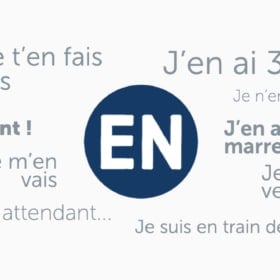 How to Use the Pronoun EN in French w/ Audio