What is the difference between un bistro, un resto and une brasserie? The three are types of restaurants in France, so food will be involved! But there are important differences among these three kinds of French restaurants.

Bistros can be more or less trendy depending where they are, and although “un bistro” is usually low key and a bit loud, I’ve know some that are actually quite upscale.

Prices varies tremendously depending on the said bistro.

Un restaurant (or “un restau” or “resto” in short) serves any kind of food. It may be more or less chic. Prices and ambiance vary very much as well depending on the kind of restaurant…

Restaurants and bistros serve lunch and dinner at fixed hours. The hours may differ but usually it’s 12:00 till 2:30-3PM for lunch, 7:30PM till about midnight for dinner.

The ambiance and setting of restaurants in France can vary tremendously. We do have American style fast food but the French equivalent would be “un restaurant ouvrier” – nothing in common really, but food served fast and in a very relaxed setting, for a very good price.

On the opposite of the scale, you’d have “un grand restaurant” which doesn’t mean that it’s big in size, but big in quality of the experience… So expect excellent cuisine and “chichi” service, and the bill to go with it. Au contraire, “un petit restaurant” means a neighborhood restaurant, maybe even “un bistro”: a restaurant not pretentious and not too expensive.

And then, you pretty much have everything in between. There are many, many websites and apps now available to check on a restaurant before you go in: I like “la fourchette” but it’s not the only one. In any case, do check on the restaurant you are about to go to when you are in big cities. There are tourists traps, but with so many delicious restaurants all around you in large French cities, it’s a shame to waste a meal!

Watch out that in big cities, making a reservation is a good idea, especially on the weekends.

More about Dining Etiquette and Tips in France. 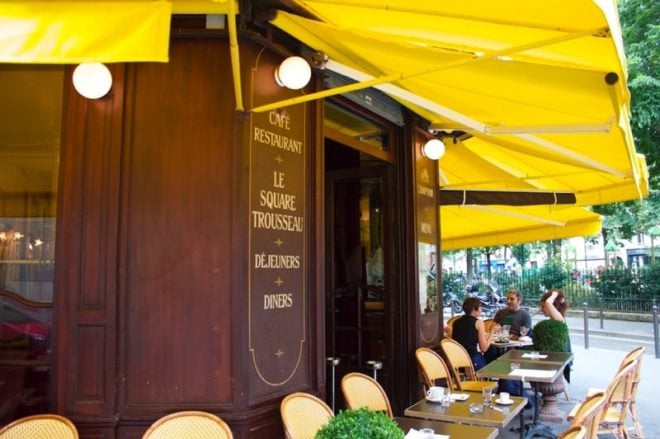 Brasseries serve throughout the day, till sometimes very late at night and have a larger menu, with usually very traditional French cuisine.

Brasseries are very traditional French cuisine restaurant: they can be pricey, and although popular with business people, so somewhat on the casual side, they can be quite upscale.

Brasseries are not the best choice for a romantic dinner for two. They are usually a bit noisy, often being held in large, high ceiling, open (and luxurious) rooms.

You are likely to find the same dishes in many different brasseries, like:

There are many, many famous “brasseries” in France, several are very famous and older, like in Paris “Bofinger”, “La Coupole”, “Le Sud”, “Julien”, “Brasserie Flo” – all known for their amazing Art Déco decors and history.