Funfairs usually last for about a week in France, and come for special dates, very often around Bastille Day (le Quatorze Juillet,  AKA La Fête Nationale, but never referred to as “le jour de la Bastille”).

There are some big French funfairs which are fixed. They are there all year-round.

However, smaller, roving fun fairs going cross country are quite popular during the summer months. The same fun fair may also come back around the town’s Saint patron day.

So let’s begin our virtual visit of  French funfairs.

Table of Contents
1 – Les Manèges – Merry Go Round and Rides
2 – La Maison Hantée – The Haunted House
3 – Other French Funfair Attractions
7 – And last but certainly not least, there is the French funfair FOOD !!!

First of all, there are all kinds of manèges (Masculine. Merry-go-round and rides)

Access to the rides is regulated by height, but les forains (the people working at the fair) are much more lenient about it than in the US… as Olivier and Leyla demonstrate on the last picture above: it was really fast, Leyla is 8, loves it!!! (and can’t wait to be able to go on the REALLY scary rides) 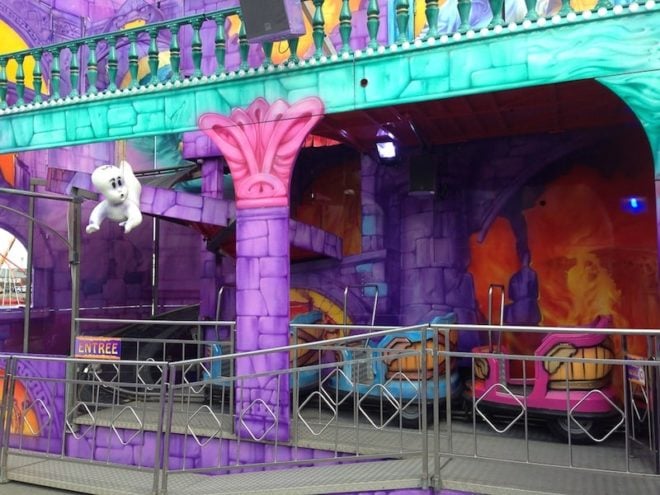 La maison hantée (the French haunted house) is rather scary.

At the end of the scary ride among statues and robots, a real guy in a scary costume with a plastic chainsaw that makes a lot of noise usually jumps on you out of a black corner…

I thought Leyla was going to have a heart attack… And I was rather mad that they let us go on the ride!

7 – And last but certainly not least, there is the French funfair FOOD !!!

And much more: beignets (m.- fritters) or all sorts, sandwiches, paninis (grilled sandwiches)….

And of course, one cannot leave the fair without une barbe à papa (literally , a daddy’s beard: cotton candy) !!