We have only a few expressions using the word “Jésus”, Jesus in French. I will translate and explain them, and illustrate them with an example + tips

First, let me share some thoughts about Jesus in French : how do you pronounce “Jésus” and “Christ” in French ? Is Jésus a common French name ? Do we use it to swear?

The most common French translation for Jesus is “Jésus”.

The J is soft as in “je”, so it’s not an English “dj” sound nor a Spanish jota. Note the accent on the é. The middle S being stuck between vowels is pronounced like a Z. The final S is silent.

So it’s pronounced “jézu” in French.

3 – Is Jesus a Common French Name?

Jesus is not a common first name in France, unlike Marie which is extremely common as a main first name.

It is extremely common to include a Marie in the list of names for woman as well as for man in French Catholic families.

Note also that men sometimes have a composed first name which includes the name Marie : Jean-Marie.

5 – How do you Pronounce the Word Christ in French?

Note that there is a strange pronunciation situation here. When “Christ” is used by itself, the final S and T are pronounced.

However, often when it is combined as in “Jésus-Christ”, the S and T become silent.

I have no idea why, but it’s a fact. You can hear this during my recording of the French Catholic mass.

Strangely enough, we don’t use Jesus’ name this way in France. Not just by itself.

7 – The French Don’t Use Christ for a Swear Word, But Canadians Do

There is a famous Lyon’s sausage called “Jesus”: it’s a sort of thick salami.  Maybe “Le Jésus” was named this way because it is a speciality which is served around Christmas time.

This expression, we do use. It’s a bit old-fashioned, but possible.

Here again, French and English share the translation and meanings of this expression.

This one is quite old-fashioned in French, and actually a bit snobbish. 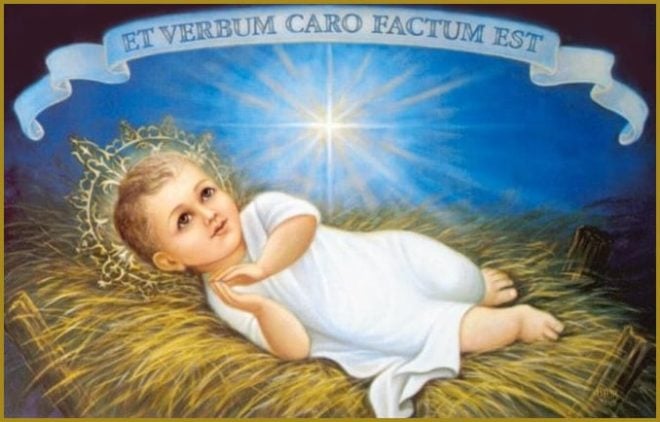 The exact origins of this expression are unknown, but it is used around wine, to say the wine is particularly good and silky.

Literally, it translates as “it’s the little (baby) Jesus in velvet pants”.

Weird and weirder. “Le Petit-Jésus” is a common synonym for men’s genitalia in French. So “to put little Jesus in the manger” is also part of the French sex expressions!!

Far for me to proselytize, but some of you may be interested in my recordings of the French Mass in French, or my easy bilingual learn French in context story about Christmas and how it is celebrated in France today.