How cute would it be to give your pet a French name? The French have many pets, but what are the most popular pet names in France ? And what about this French pet naming tradition? Let’s dig into the universe of French pet names.

By the way, if you arrived there because of a search, and were looking for “French pet names” as in “French love nickname“, follow this link!

There are pets names that the French give their pets all the time. They are kind of traditional, well, not really traditional but common French pet names… Nowadays, people try to be a bit more creative, but you’ll still hear these names.

These pet names are also the typical ones you’d use if you’re calling a pet and don’t know its name.

So they are the fall back of cats and dogs names in France. You’ll hear them in songs, movies…

Well, it’s not so much a rule than a tradition.

It’s usual to name a pure breed pet with a name starting by a letter which changes each year.

According AnimauxRelax.com to the top French pet names for 2018 were:

But of course, no-one forces you to follow this tradition. You may name your pet in France whatever you feel like.

According to the website Nomdunchien.com, the top French pet names in France are:

The site claims that about 2 to 3 male dogs over 100 male dogs in France are called “Snoopy”. I am not too sure how reliable this info is though… I’ve never met a dog called “Snoopy” myself in France… but we love the “Snoopy” character too, so it’s plausible.

Would you like more inspiration? I liked the lists on the site caniprof.com 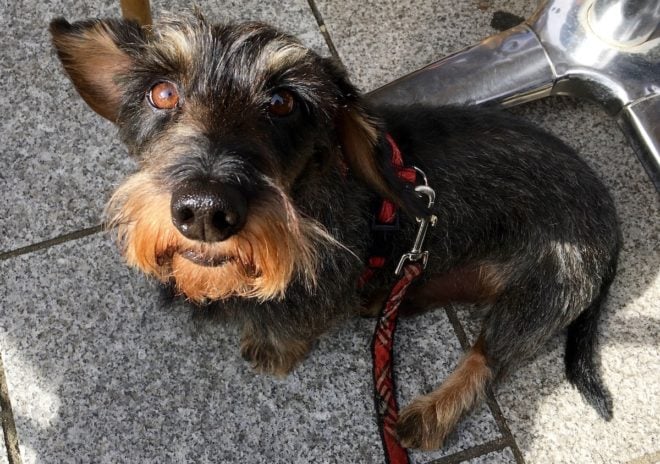 Both Olivier’s family and mine love doxies. I grew up with a long hair dachshund called “Mirabelle” – a very sweet little plum. A rather common French pet name for a dog too.

Olivier grew up with a wire hair called “Titou”.

Now, Olivier’s grandma’s dog is the handsome wire hair in the picture above. If you follow French Today on social medias, you’ve seen him before since he often hangs at our house. His name is “Festnoz” which is a Breton word meaning ‘party of the night’. A very good choice for him!

When we lived in the US, Olivier and I (both French) named our two dachshunds “Pixel” and “Zip”… Geek names indeed. The breeder was so mad at us! Especially for Pixel whose original name was Dianna or something like that…

So, to tease her, I turned Zip’s official breed paper name to “Zip XXL Audacious de Koshana” (the later was his line)… She was furious. It was hilarious!

I never showed my dog anyway. Oh, and to be clear, the XXL was just because Zip was a very tall dachshund. Upper limit to the acceptable breed size. No dirty joke there although it did come to mind that the whole name put together would have been great for a certain kind of movie star… LOL.

What about you? Do you have pets and if so, what are their names? Let me know in the comments below!