How To Ask May I in French

How to translate “May I” in French? I hear many students use “puis-je”. It’s possible, but quite out-dated nowadays. Here is what I would say.

My tip when asking permission in French: don’t try to understand “why” we say “may I” this way in French. Just accept that we do, and memorize the examples so you may in turn use them in conversation :-)

There are many different ways to translate “may I” in French…

In extremely formal and old-fashioned French, we used to say: “puis-je”.

Puis-je m’asseoir ? Might I sit down?
Puis-je avoir cette danse? May I have this dance?

I personally never use “puis-je”. I’ve seen it written much more, especially in French literature.

I do know some people who use it frequently nowadays still… So, it’s a question of personal choice at this point. Kind of like using “might I” in American English.

Using “pouvoir” in the French conditional is common to ask permission in French.

Note that we don’t usually use inversion with the “je” form. “Puis-je, pourrais-je” are one of the few instances when it is actually possible to do so.

Pourriez-vous me donner du feu?
Tricky to translate… I try to find interesting examples that you could actually use. This sentence is used when asking for a lighter or a match to light a cigarette. The literal translation would be “could you give me some fire”… It means “would you have a lighter?”

Today, to ask “may I” in French, the most common way is to use “pouvoir” in the present indicative, using “est-ce que”… or not… As I’ve explained many time in this blog in modern French, it’s common not to use any interrogative construction and simply raise your voice to transform a statement into a question.

I understand this is a bit weird for English speakers because it sounds like you are not being polite enough… “can I” instead of “may I”… but that’s perfectly OK in French to use “je peux” for “may I”.

Now here are others way of translating the notion of “may I” in French. 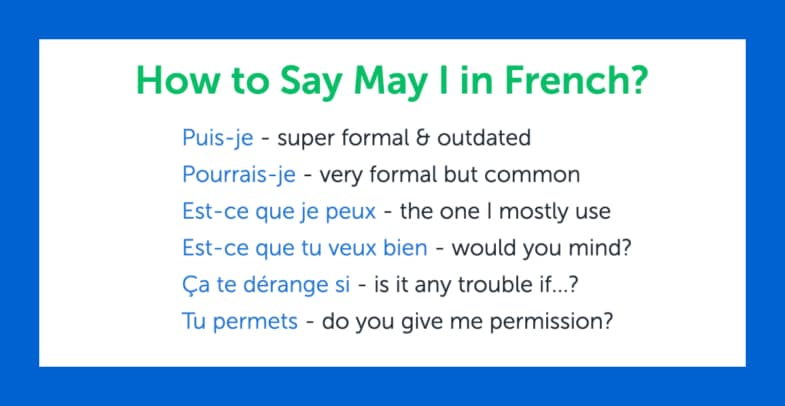 4 – More Ways of Saying May I in French

Suggestions? Do you know more expressions to say “may I” in French? I’d love to hear them! Please add them to the comments below!