Ratatouille… Not just a friendly Disney rodent but probably the most emblematic summer recipe from the Provence region. It combines the tastiest summer vegetables into a single dish where the flavours blend to perfection…

There are actually two recipes for ratatouille. The one that most people make and the real traditional one!

The difference ? Time and flavour.

Most people who make ratatouille dump all the vegetables at once into a pot, let it cook for 30 to 40 minutes and call it a day. You’ll get a very good ratatouille for a week night but I would urge you to take the time to really go through the real recipe. You’ll discover how a dish can possibly combine flavours so well and yet have each vegetable flavour individually stand out. What sorcery is this???

The key is cooking each vegetables individually and then bringing them together at the end. Don’t worry, even though more time is needed, the amount of dish cleaning is kept to a minimum since each vegetable can cook in sequence in the same pot. 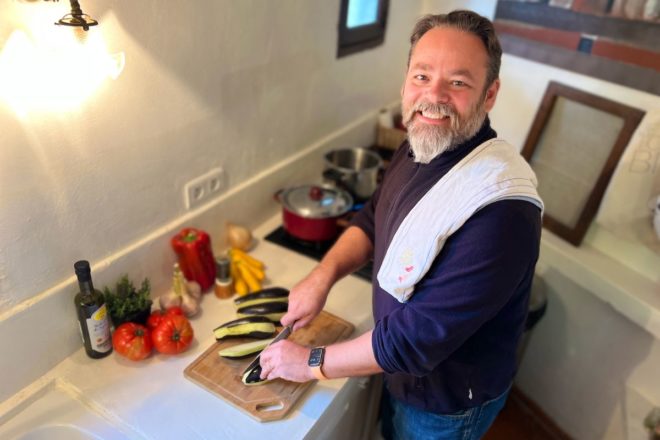 Ingredients for a Traditional Ratatouille

Keep in mind that a Ratatouille is a summer dish: you need fresh and tasty veggies for the ratatouille to taste great! If you are reading this anytime between late fall and early spring, move along to a different recipe!

Follow the link to learn the French vegetable names with audio. What about numbers in French?

Preparing the Eggplant for Your Ratatouille

This is the first item to take care of since we’re going to need to salt it and let it sit for a while to draw the moisture out. We do this to, one, remove some extra moisture from the eggplants and, two, remove some of the bitterness.

So, rince the eggplants and cut off the end with the stem (be careful, sometimes this can be really spiky!) Then to remove some of the skin, use a peeler to remove about half of the skin (I remove strips so that I get both skin and non-skinned pieces). 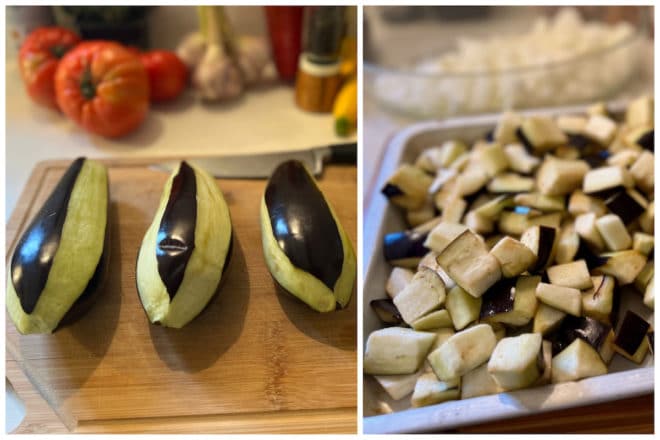 Then cut the eggplants into cubes of about 2cm. Put them on a pan and heavily salt them and make sure you shake all the pieces together so they are all coated with some of the salt.

Set aside while you work on the other vegetables.

Preparing the Red Pepper for Your Ratatouille

Next one up is the prep of the red pepper. I like to go an extra step and remove the skin so that its more digestible (Camille loves pepper but they don’t love her back so I try to make it as digest as possible for her – and put half of what the recipe asks for. I LOVE roasted red peppers but in a couple you compromise :-)

To easily remove the skin and also add some great charred flavour.
If you have a gaz stove/grill put the whole pepper directly on the flame and using tongs, rotate the pepper every minute or so.
If you don’t have a gaz stove, use your oven’s broiler setting to achieve a similar result. 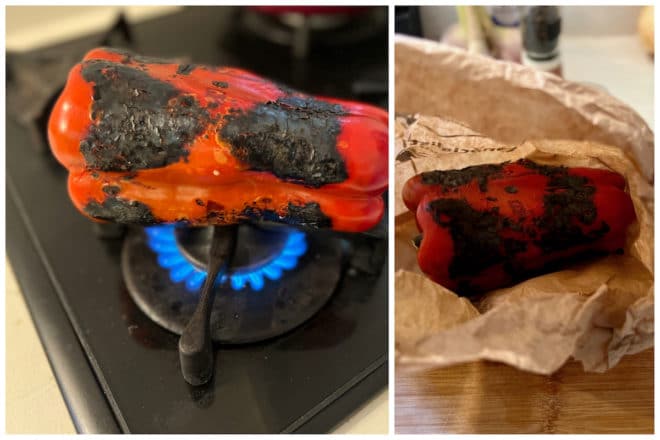 Once most of the pepper’s skin is roasted (you won’t be able to char all of the skin, but as long as you have 75% of it, that’s great) put it inside a closed paper bag or a Tupperware.

15 minutes later, once you take it out of the paper bag/Tupperware, you’ll be able to easily scrape most of the skin out with just the back of your knife.

Now cut the red pepper open and remove all the seed as well as the white part you see (they are bitter). Cut the pepper into pieces about 3cm wide. Set aside.

Preparing the Tomatoes for the Ratatouille

For the same reason as the peppers, we will remove the tomatoes’ skin and seeds to make the whole dish easier to digest. 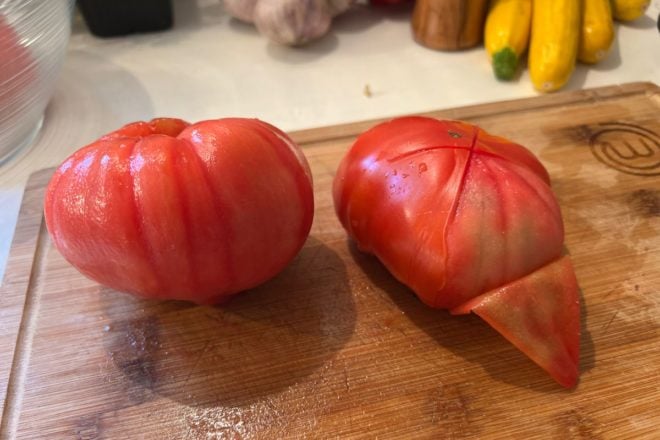 Wait a few seconds for it to cool and then using your knife, you’ll be able to peel off the skin really easily. Put the peeled tomato on it’s edge and cut it in half to expose all the seed pods. Using your finger, remove as much as possible of the liquid and seeds. Chop into rough pieces. Set aside.

Preparing the Zucchinis and onions for the ratatouille

These ones are simple by comparison!

For the zucchini’s, just wash them and remove the stem and cut them into 2cm chunks. 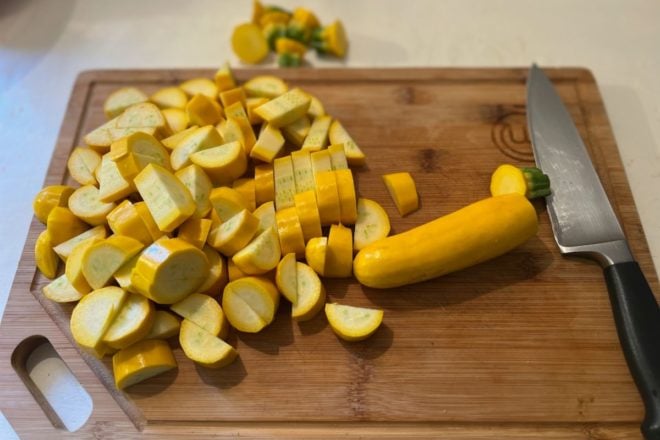 Peel the onions and dice them.

Can we get on to some of the Ratatouille cooking??

In a large pot (hopefully larger than what I had to use for these photos in our vacation house!) put some olive oil and start roasting the zucchinis. Roast them for about 10 minutes until they get some nice cooler but are still ‘al dente’. Set aside into a large bowl.

Take your eggplant pieces (which should now be covered in moisture) and put them into a clean clothe and pat out as much moisture as possible. Add more olive oil into the same pot. Roast the eggplant pieces until they also get some colour and begin to soften up. Set aside into the same large bowl as the zucchinis (why dirty any more dishes!)

Add more oil into the pot, add the red pepper pieces and roast until they also get some colour but are not quite cooked through. Set aside into the large bowl (you should now have a beautiful looking bowl full of colours). 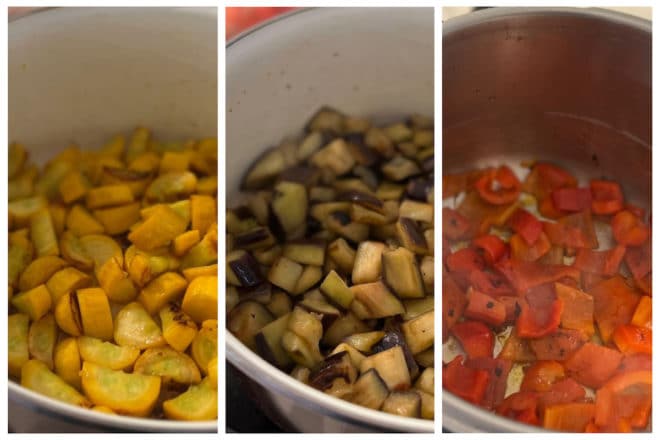 Now that the main vegetables are ready, time to make the ‘sauce’ to tie them all together.

In the same pot, add yet more olive oil and add your onions. Roast them until you get some browning (but not too much, just some light colour). Then add the tomato pieces and cook for another 10-15 minutes until the tomatoes have almost broken down. 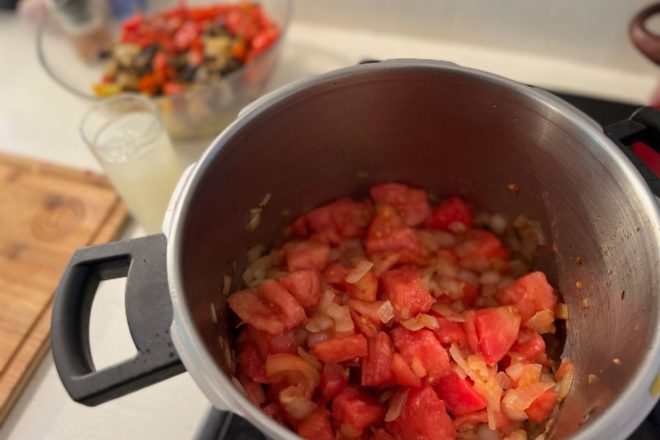 At this point, you need to taste the tomatoes. If you are making your ratatouille at the end of summer, your tomatoes will be sweet enough but if you make your ratatouille earlier in the season, then you might need to add a bit of sugar to compensate for the lack of natural sweetness of your tomatoes. Don’t over do it, remember you can always add some more later but you can’t remove it!

Now finally, we can add all the vegetables back into the pot.

Chop the garlic up (I’m using fresh garlic in the photos) and remove as much of the stems from your thyme as you can. Add them to the pot and mix everything together gently. Add salt and pepper to taste. 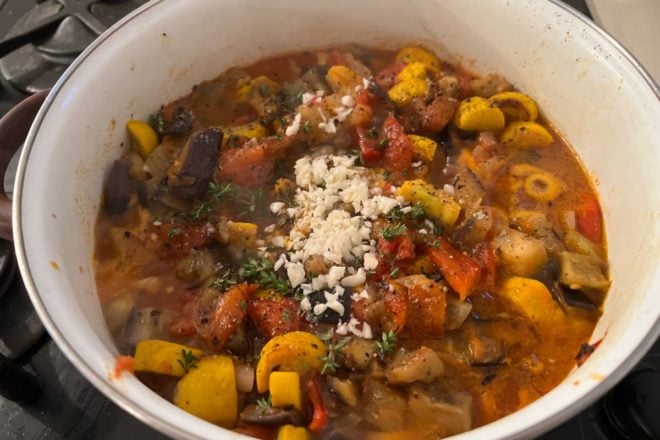 Let it cook for 30 minutes on low heat mixing gently a few times during that time.

How to Serve Your Ratatouille

You are now finally ready to enjoy the fruits (vegetables?) of your labor. Be careful that a ratatouille should never be served piping hot. It’s actually a lot more tasty when served warm since the flavours can be appreciated a lot more.

An authentic ratatouille is absolutely perfect on its own or along with lamb chops or a fresh grilled fish… One of my favorite ways to enjoy left-over ratatouille is to reheat the ratatouille in a pan and break a few whole eggs and cook them inside so yummy!!! 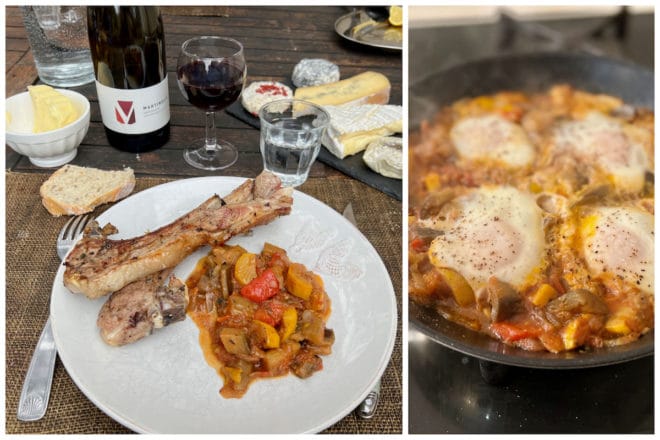 The traditional ratatouille recipe is more work indeed but it’s completely manageable and if you have access to good quality vegetables, there is no better embodiment of summer and southern France in a single dish. It’s well worth the effort.

If you prepare this dish, make sure to let me know how it turned out in the comments below. Bon appétit !