7 French dishes you must try

If you’re a foodie like me, you must wonder what are the best French dishes to try.

Sit back and relax for the next 5 minutes, I’ve built just for French Today my personal favorite French dishes!

I am Anthony, a French chef at Pastreez. It’s a bakery where you can buy macarons online, chocolate chip cookies, bonbons, and crêpes delivered to your door in the United States.

Naturally, my list will contain main courses, but desserts as well! Here are my top 7.

Let’s start with a classic French breakfast staple : “les croissants”. Even though they’re not a dish per se, these flaky pastries may be the most well-know and recognised French food. Well… you have to admit they are perfect with a cup of coffee or tea.

Because croissants are one of the most popular French pastries in the United States, you can now find them in most coffee shops. They may not be all as good as a typical French croissant from France… but I’ve had some really good croisants in the US as well.

As a French guy, I can tell you that nothing compared to French croissants on a family breakfast.

When I was a teenager, my father would send me to the closeby bakery on Sunday morning, either on foot or riding a bicycle. The idea was to come back before everyone woke up, and treat them with a little taste of home.

I would buy croissants, pains au chocolat, and a traditional baguette. My brothers and sisters were happy to find these warm pastries, and it felt good to make everybody so happy.

These moments are priceless! That’s why croissants are such an important French delicacy to me.

If you’re familiar with Camille’s French audiobooks, you’ll see that her characters eat croissants as well. It’s not a myth! French people do love their croissants!!!

Now let me tell you about one of my absolute favorite French desert. Only to think about it makes my mouth water!

The dish is made by first caramelizing sugar and butter in a pan, then adding apples.

Tarte Tatin was invented in the late 19th century by two sisters who ran a hotel in the Vallée de la Loire in France.

The dish is named after the sisters, Caroline and Stephanie Tatin. Try this unique tarte tatin recipe on French Today. 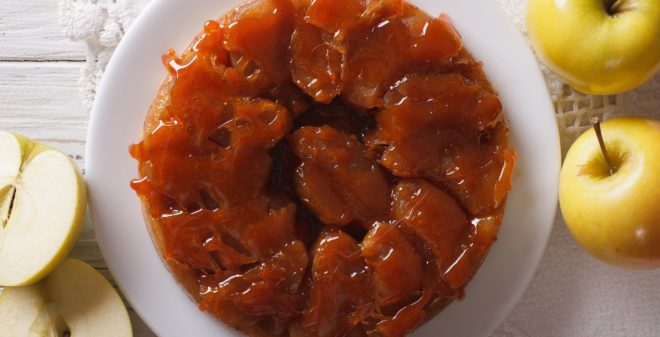 Quiche – A savory egg and cheese pie – is perfect for breakfast, lunch, or dinner.

My favorite quiche is Lorraine, a region in northeastern France. The quiche Lorraine is a bacon and egg pie.

The dish was created by peasants who used whatever ingredients they had on hand. Today, quiche Lorraine is a gourmet dish served in restaurants across France.

If you’re in the United States, you can find quiche Lorraine in most grocery stores. Or try this recipe at home.

My personal experience with it was when I grew up in Guadeloupe, French West Indies. Quiche Lorraine was the typical dish I used to buy at the pastry shop, near my school because it makes for a delicious, fast and easy lunch!

A clafoutis is a fruit-filled flan. The dish is typically made with cherries, but other fruits such as apricots, plums, and apples can be used as well.

A clafoutis is traditionally made with a simple batter of eggs, milk, flour, and sugar. The batter is poured over the fruit, then baked until golden brown.

This dish is typically served for dessert, but can also be enjoyed for breakfast or brunch.

I remember the first time I had clafoutis. It was at my grandmother’s house in the suburbs of Paris.

She had made a cherry clafoutis and I was so intrigued by this new dessert. The combination of cherry and custard was delicious!

Of course, as a good French boy, I had to try to dip it into milk. Yes, it’s a habit I have for desserts!

A classic French chicken dish that’s cooked in red wine and served with vegetables. Coq au vin is a traditional French dish that dates back to the Roman era.

The dish is usually made with chicken, but can also be made with game birds such as pheasant or quail. 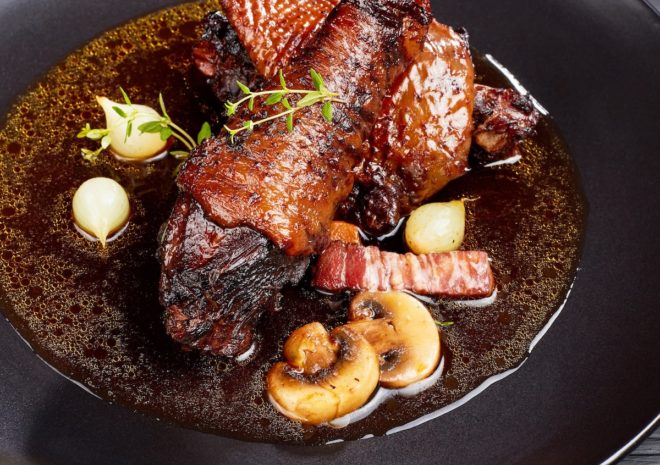 Do you know what a macaron is?

Macarons are made with almond flour, sugar, and egg whites.

Two shells are “sandwiched” together with a filling in the middle. The filling can be buttercream or ganache. Macarons are in most pastry shops in France, and are one of the most iconic desserts worldwide.

As you might know by now, my wife and I are fond of macarons. And we made it our American dream!

Today, according to Le Cordon Bleu Paris, we make the “most authentic macarons in the US”. And we’re launching chocolate chip cookies and bonbons as well very soon. Yummy projects in perspective!

For those who are curious, we detailed our authentic French macaron recipe to help you make these at home.

A rich and creamy custard topped with a layer of crisp caramelized sugar.

Crème brûlée is a classic French dessert that’s the ideal add-on when you go to a restaurant in France.

The dish is made with heavy cream, egg yolks, and vanilla beans. The custard is then baked in a ramekin and cooled.

Once it’s cooled, a layer of sugar is placed on top and caramelized with a kitchen torch.

The result is a crispy, sweet topping that contrasts perfectly with the smooth and creamy custard below.

I personally love a good crème brûlée for a special occasion, such as a romantic dinner. To me, this balance of crispy top and the melty bottom is the perfect taste in the mouth.

This hearty onion soup is perfect for a cold winter day. Soupe à l’oignon is made with beef or veal stock, onions, and white wine.

The soup is typically topped with croutons and Gruyère cheese. It’s then baked until the cheese is melted and bubbly.

Soupe à l’oignon is a perfect example of French comfort food. It’s warm and it will make you feel cozy on a cold day.

Soups are not the fanciest dish, I agree. But they are incredibly efficient in wintertime.

In my case, I fell in love with it after a long day on the slopes, in the French Alpes. Try this soupe à l’oignon recipe on French Today.

As featured on the main picture of this article, “Le cassoulet” is a hearty French stew made with beans, meat, and vegetables. Cassoulet is a classic French dish from the region of Languedoc-Roussillon.

The dish is made with white beans, pork, duck, and sausages. The meats are cooked in a “cassole”, a traditional earthenware pot.

Cassoulet is usually served with a green salad and a glass of red wine. This dish is perfect for a winter meal as well.

Just like the “soupe à l’oignon”, cassoulet is not the fanciest dish ever. You can even find some in cans at the supermarket.

Cassoulet was created in the 14th century as a way to stretch out limited ingredients. At that time, cassoulet was made with whatever meat and beans were available.

But it’s a fast, healthy dish that many in France are still eating in winter.

I hope you enjoyed my list of French dishes that you must try! What’s your favorite French dish? Let me know in the comments below.

Any questions let us know!