With dry-aged meat (la viande maturée) being the new big thing in France right now, knowing the precise French vocabulary to talk about the age of food might prove useful for all the foodies out-there.

French uses different words to talk about age for food than for people. Learn how to say in French “a ripe fruit, an aged cheese, an old wine to dry-aged beef”…

How To Say Dry-aged Meat in French?

Dry-aged meat is all the rage in France right now, and is even now offered in many of the Leclerc supermarkets. Olivier and I are so happy about it!

The process for dry-aging meat is called “la maturation”. The adjective is “maturé(e/s)” 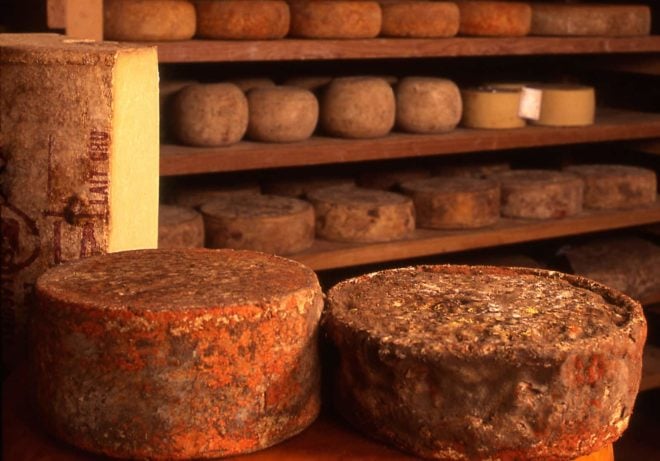 How To Say Aged Cheese in French

For cheese, the process is called “l’affinage”. The adjective is “affiné(e/s)”

Yet again, sometimes we say “un vieux chèvre” (an old goat cheese) and that is fine.

How To Say A Ripe Fruit in French?

For fruits, the process is called “le murissement”. The French adjective for “ripe” is “mur(s) / mure(s)” (also spelled with a û: both spelling are acceptable)

With the homophones “un mur” – a wall, and “une mûre” – a blackberry, I can make a fun sentence:

Note that we also use “mûre” for women in France.

But you could also say:

How To Say An Old wine in Frencch

It’s perfectly fine to use “vieux” for wine.The process is “le vieillissement”. The adjective is “vieux/vieil/ vieille(s)”. You could also use “âgé(e/s)”.

Some of these French age related terms for food are interchangeable – we also talk about “une cave de mûrissement” for meat… or “une viande affinée”.

But be careful using “vieux” with food. “Un vieux fruit” for example would be a bad thing, it would imply it’s “too” old… Honestly, I am not even always sure of what adjective is “politically correct” to use around food!

Voilà, I hope this lesson on how to express age in French for food will be useful to you. You may also like my lesson on how to comment on food in French, or French offal and common French dishes made with organ meat.