Pain perdu [literarily “lost bread”] has been around for many centuries in France but, spoiler alert, we don’t serve it for breakfast if not ever!

The origins of pain perdu is really a way to avoid throwing away stale bread and is not considered fancy by any means.

Even though it’s one of the most popular breakfast options in the US, in France you’d only find it on desert menus and most of the time, it would be a fancy-fied version (with a brioche bread and interesting spices).

It’s mostly a ‘utilitarian’ dish: “we have lots of stale bread, let’s make something out of it!”

Even though most tourists to France find it strange that you’d even have any of that wonderful bread left over, it happens quite a lot and the advantage of pain perdu is that you can mix all kinds of different breads that are left over, from baguette to pre-sliced breads…

Just mix together the milk and the whole eggs (the ratio is pretty loose and depends if you like your pain perdu more eggy or not but start with 100ml of milk for 2 large eggs).

Adjust the quantity of liquid for the amount of bread that you have. Cinnamon powder and vanilla extract are optional but add a very nice flavour the the final product – add to taste.

Some people might add a sweetener to the liquid but I tend to not do that because the pain perdu might caramelise more than needed and you’ll be adding a sweetener when serving it anyways – remember, the French don’t appreciate overly sugary flavours even in deserts.

Cut your old bread into 1 to 2 cm thick slices. If you have a baguette-style bread, you can either cut it length wise (you’ll have more bread), or cut thinner and smaller slices cross-wise. Length-wise feels very French but one side will be only crust and will not absorb the liquid well, it’s up to you…

Once all your bread pieces are cut, dunk them into a large dish with the liquid and then, you start playing a game of “who… is… rehydrated!?!” [game show host voice].

I tend to use a fork and gently create holes in the stale bread for it to absorb more liquid. If your bread is really stale, you might have to let it soak for 20-30 minutes, if the bread is still pretty ‘fresh’, it might only take a few minutes.

If you are travelling and have only access to a small dish like I had, then you’ll have to spend many minutes moving the bread around to get enough bread-face-to-liquid-contact ;-)

Once all the bread has absorbed enough of the liquid, put some butter in a pan and roast on small-medium heat for about 5 to 8 minutes, flipping the bread slices once they get enough color.

How the French Serve Pain Perdu

In North America, almost every household has a bottle of Maple syrup in their pantry. Although it’s now commonly found in most French supermarkets, it’s not something a lot of French people have in their house. 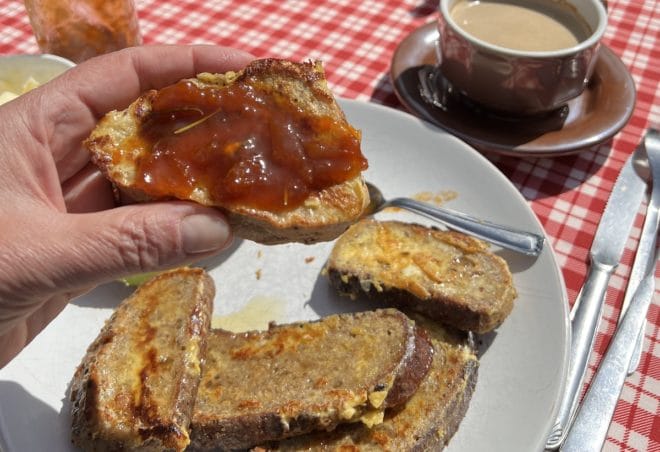