Pierre is an excellent teacher.  Both his parents were university linguistic professors – that upbringing shows in his teaching skills.   Pierre was relentless in correcting my many grammatically bad habits while always being charming, funny, and interesting.  I learned a great deal during my week there and plan to return.

My husband, a non-French speaker, came with me for the week so the logistics were a little difficult in trying to have a total immersion experience.  Pierre encouraged me to translate for Len while he and I spoke in French.  Len enjoyed his week too.

Every day we took long walks with Pierre’s 2 dogs, Joy & Luke.  The countryside is really lovely and interesting and they were great guides.  Len & I rented a car and in the afternoons we went exploring.

Pierre also took us on several excursions.  The most interesting for me was a day of sitting and walking meditation at Thich Nhat Hanh’s Le Village des Pruniers.

Another important part for me was the proximity to Le Chemin de St. Jacques.  My husband and I have hiked the entire route, Le Puy-en-Velay to Santiago, Spain, except for this one section.  This time we enjoyed driving it and Pierre helped us find important historical places (and wineries) along the way.

The second week of our holiday was spent with French friends who commented that my French was greatly improved. 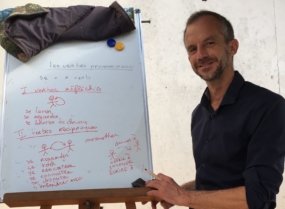