There was a heat-wave in the south of France when I spent a week with Pierre in the picturesque Tarn-Garonne – however my gîte accommodation was of sturdy construction and I had no problem with the heat.

Pierre came each morning at 8.15 and we had breakfast together. The rest of the morning was spent in formal teaching and then Pierre would prepare lunch – sometimes a tasty galette, sometimes a salad. One day we went to the nearby village of Montricoux and bought fresh produce from the market.

We visited very interesting villages in the area – Bruniquel, Puycelsi and also Penne which is in the valley of the Aveyron. And there was a wine-tasting too.

Pierre left at 4pm and I prepared my own evening meal – often using salads or other foods which Pierre had left for me.

I learned a great deal and appreciated Pierre’s concentration on speaking the language as it is spoken by most French people- the familiar, rather than the strictly formal.

It was a great experience – thank you Pierre. 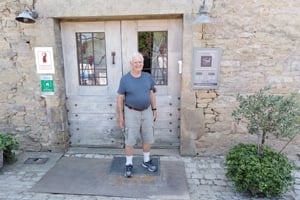 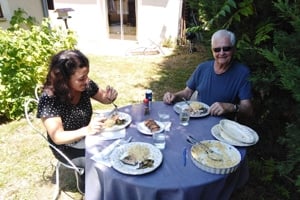 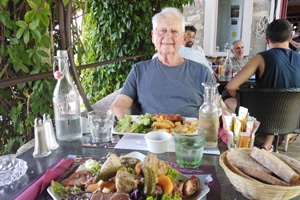