I had the privilege and pleasure of enjoying a week of Immersion in the Tarn-et-Garonne region with Pierre.

During the week, we started the mornings with a delicious breakfast followed by a few hours of class, then lunch and an afternoon hike or ride to one of the many medieval villages in the area. The days were intensive but relaxed, structured but casual, if that makes sense. The evenings I spent assimilating the day’s learning, reading, hiking the area, and relaxing with a French film. Pierre has quite a library to choose from: movies from all genres.

Other than the jaw-droppingly beautiful countryside and quaint medieval villages we visited, one of the things that impressed me the most was Pierre’s patience. He encouraged conversation, and saw mistakes as a means of improvement…and I offered him lots of them.

Over the years, I’ve picked up numerous “mauvaise habitudes” that would show up repeatedly in conversation. Pierre would patiently corrected me, explain the grammar, and the next day (or even later the same day), gently correct me again. And again. His reminders helped me break bad habits and progress in the language.

Overall, I found the Tarn-et-Garonne to be such a stunning setting and Pierre to be such a good teacher, that someday I hope to return for another week of immersion with him. 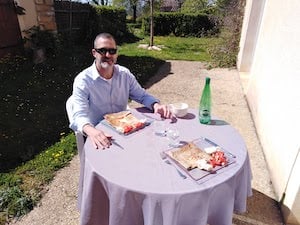