I chose to use French Today because it seemed a solid and reliable company. It was difficult choosing which teacher to apply to stay with. I decided to apply to stay with Nathalie because she was based in a village, she wasn’t too far south so the weather wouldn’t be too hot and she offered French conversation with no lessons.

This suited me down to the ground. I wanted to build on my conversation skills, to put into use vocabulary I’d learned here in Singapore and I wanted to begin developing a sense of humour in French. I had had experience of language immersion but not in French. I was somewhat nervous about how I would go. Nathalie had stated that she preferred B1/B2 level. Thankfully she accepted me at A2 level.

I paid extra in order to be picked up from Paris which was well worth it. The French began from the moment I got in the car! I was somewhat nervous I have to say. Would I manage? Did I have enough vocabulary? Would Nathalie and I get on?

I had an awesome time! Nathalie was welcoming, friendly, intelligent and funny. Prior to my arrival she emailed to ask what I hoped to get out of the program so she had the heads up prior to my arrival. Nathalie quickly found some children’s books with songs in French that I could start learning. I showed her my murder mystery book in French that I’d bought. Way too hard she said. I’ll find you something more suitable (all said in French). She found me a book she’d had as a child called Contes et légendes du Mexique by Fernand Nathan. I read the story called La cucuracha. It began like this: Il était une fois une cucuracha…..

We visited a traditional market next to a beautiful river. At a tabac shop I bought a magazine called Marmiton. I thought Marmiton was just a website. Apparently not. There were loads of good recipes (all in French) I offered to cook one of the recipes for dinner (see the photo). Such fun. We also bought food for a picnic and went and sat beside a beautiful river and ate lunch. We visited Fontainebleu which was truly amazing. Living in Singapore, we are a bit short of space. The sheer size of Fontainebleu just blew me away.

We did what I call a mini Camino. A walk had been laid out beginning in a village and then going beside a river and fields and back to the village. We just had to follow the yellow arrows. We went to a local bar after that for quick drink. I talked to some locals. One evening Nathalie’s friend held a dinner party. I was invited. What a privilege. They were inclusive but at the same time spoke at their normal pace, no slowing down for me. It was awesome. I loved the challenge.

Another evening we went down to the community space and watched the semi-finals of the world cup soccer. For Bastille day we went and watched a Spectacle with dancing, music and fireworks. This was followed by a disco.

Nathalie introduced me to popular music in France for example Claude Francois. I started to learn how to sing Si J’avais un marteau, je cognerais le jour – the French version of If I had a Hammer.

As you might have guessed, I had a wonderful time. Would I apply to do an immersion program again? Sure thing. 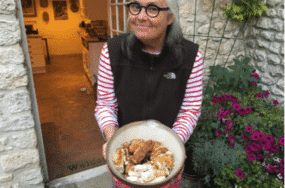 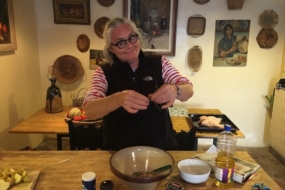