I have been learning French for a very long time but had hit a plateau. Despite putting in the time, I felt that progress was limited. My French-American girlfriend wouldn’t even speak to me in her native tongue because, while my reading and writing were OK, the slowness and clumsiness of my speaking and listening were unbearable for her.

So I decided to give a homestay immersion program a try. Wow, what a difference two weeks with Isabelle made!

My French definitely improved. Isabelle pointed out a few things that I had totally never even thought about to help me make significant progress.

Near the end of my stay, I went to the movie theater and watched a French film. For the first time in my life, I was able to follow a French film from start to finish with no subtitles. Though I still didn’t understand everything, it was the first time I understood enough to the point that the film was actually pleasurable to watch! Previously, I struggled understanding what was happening in French movies even when watching at home with constant rewinding and replaying. It was one of the happiest moments in my life and I’m not kidding.

Arcachon is a charming little beach town and is totally accessible by foot / bus from Isabelle’s place. Isabelle also took me to the Dune du Pilat which was amazing. I’m from sunny southern California with its supposedly amazing beaches but I was completely amazed by the Dune du Pilat. Definitely a must see!

It is also very easy to hop on a train and do a day trip in Bordeaux.

As for Isabelle, she was super nice. She was always cheerful and patient during our daily 3 hour classes, and I ate very well with her and her sons and partner. She was always happy to include me in her activities, which included tennis matches, yoga classes, and bar outings with her friends (who were all well-trained to not speak to me in English during my immersion!), as well as a kayak excursion and some soccer practice with her partner and friends.

And of course, when I wanted to take a walk around town or explore on my own, I was totally free to do that too. It was a very complete immersion program with French coming at me from all directions, sizes, shapes and speeds!

It really was the perfect environment to really relax and not worry too much about logistics and planning of daily life and just let go to focus 100% on absorbing French–which I believe is so important in making progress.

I am very satisfied with my immersion with Isabelle and once I accumulate enough vacation again I will do another one!

Thank you Isabelle and thank you French Today! 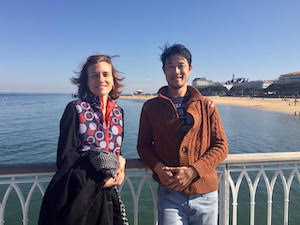