As in any language, French has a large and rich slang vocabulary that never stops from evolving.

This is the second part of the blog series that showcases current modern French slang.

For a background on this rich slang, check out part 1 of this blog post series.

As you can see, the modern d’jeunes French slang can be VERY different than what Camille teaches in her French audiobooks which focus on Today’s modern, but regular French.

Remember, this is mostly informational, it sounds really bad when a non native speaker tries to play it too ‘hip’ and uses these ;-)

“This loser is so weird”

“Le bouffon” is a very ancient word for the king’s jester (or the one that makes everyone laugh by doing silly things). It is now very commonly used in d’jeunes slang to describe a loser or a someone you do not respect at all.

‘This or it sucks way beyond words’

This expression is kind of a strange combination of a relatively new but popular French saying and transformed older slang words. I’m not sure where it originated but in French slang speak, to emphasize a particular concept, we’ll use the phrase structure “c’est [adjective] de chez [adjective]” so even in less d’jeunes conversations, you’ll sometimes hear someone say “C’est bon de chez bon” meaning it’s REALLY good or “c’est chaud de chez chaud” meaning that it’s really hot… You can pretty much insert any adjective in that expression to emphasize any concept you are trying to put across.

The word “Craignos” comes from the argot expression “ça craint” meaning that the situation is dodgy, dangerous or really bad depending on the concept. In order to apply it as an adjective, the word gets transformed into “il est craignos” which can mean a range of things like a low life, someone bizarre or someone dangerous. Check out this 1991 (I imaging straight to VHS movie) “Les Craignos” – probably some high level cinéma ;-)

So combining these 2 concepts gives you the full expression of a situation that is REALLY dodgy or sucky.

‘You really don’t understand anything!’

“Capter” is to receive a broadcast using some sort of antenna like a radio or satellite dish, we say “je capte pas NRJ à la maison” (‘I can’t tune into the NRJ radio station from home’) but in this case, it has been applied to someone to describe them as not able to understand anything.

‘She stole his iPhone‘

Here again, we find a word that is the inversion of an existing older slang word… “péta” is the verlan of “tapé” which in itself is argot (slang) for stealing like “il m’a tapé ma clop” (‘he stole my cigarette’). Not to be mistaken with another slang word, “péter” which is to break. So “Elle lui a pété son iPhone” means “she broke his iPhone”.

I hope you are enjoying this glimpse of today’s French slang and I’ll see you in another post… Feel free to suggest your favorite d’jeunes expression in the comments! 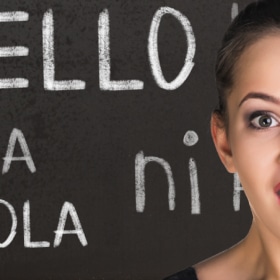