By Camille Chevalier-Karfis on February 4, 2018

How do you pronounce the Paris métro stations in French? Learn the correct French pronunciation of all the Paris subway station names of “la ligne un” (Paris métro line 1): “La Défense / Château de Vincenne” with my free clear audio recordings. Learn how to say “Champs-Elysées” in French!

“La ligne 1” of the Paris subway is the oldest Paris métro line and probably the most useful to tourists: it crosses all Paris in its middle, following the Seine river for a while and therefore it’s the subway line to take to see the majority of the most famous Parisian places such as “les Champs Elysées”, la “Place de la Concorde”, “Le musée du Louvre”, “le Marais (Station Saint Paul)”…

Please note the Paris subway is always expanding, especially the newer lines. The name of the métro stops may also change: subway stations get renamed.

So there may be a few variations from the latest Paris subway plan, but I believe my recordings will cover the large majority of the Paris subway stations, and you will hear the correct French pronunciation.

Click on the audio link to play the audio recording of the Paris métro stations.

First time in the Paris Métro?
Look at your map: if your destination station is located on the same line, it is very easy; look for the sign that indicates the end station toward which you are headed, follow the signs until you reach the platform and get on the train. Then get off at your station and follow the signs that say “sortie” (exit).
For example, if you are in the subway, at the “George 5” station and you want to go to the “St. Paul” station, go in the direction of “Château de Vincennes” and it is a direct route. It is the ninth station after “George 5.”

Some Connections are VERY long (15 minutes + Many Stairs)

Avoid as much as possible “les correspondances” (changing lines). Although they look small on a map, they are often quite long in reality, and full of stairs. Especially in larger subway stations, when a transfer can easily take you 15 minute of fast walking. Following the signs to your line can end up being a real treasure hunt!

So, chances are that will save time if you walk a bit outside the subway to your destination, rather than making several transfers.

The Paris subway is often the faster way to go from point A to point B: no traffic jams. But between the long walks, the stairs, rush hours, the pickpockets, the beggars, the heat and the stench… it’s not necessarily the most comfortable one!

Follow the links to the other Paris subway lines for more tips on safely riding the Paris métro. 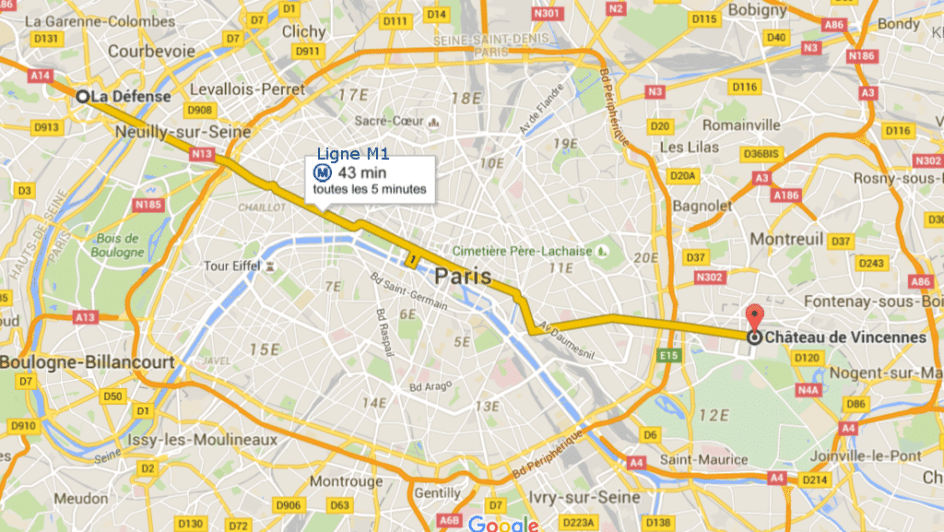 5 – Learn How to Pronounce the Paris Subway Station Names