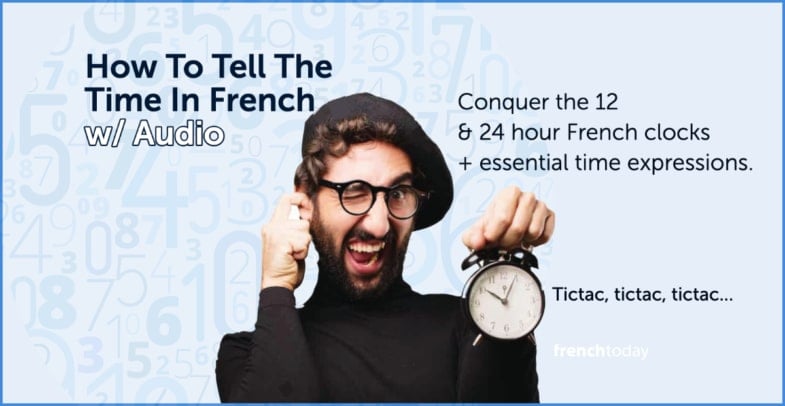 But fear not! My free lesson will teach you to understand and tell the time in French in… no time at all!

And thanks to my audio recordings, you will know the difference between “deux heures” and “douze heures” and won’t miss your train!

In French, when you tell the time, you always have to repeat the word “heure(s)”.

The word heure(s) is pronounced in the same breath as the number, as if it were a weird ending to it.

Since it starts with a silent H, you will have many liaisons and glidings.

So you see, the word heure becomes neur, zeur, treur, keur, teur with the liaisons and glidings.

Now, to tell the time efficiently and understand it, you need to first learn how to say the numbers in French. In this lesson, I’m going to concentrate on the expressions and pronunciation differences but I won’t go over how to say the numbers 0 to 59. Please follow this link to my free French number lesson with audio.

2 – How do you Write the Time in French?

We don’t write nor say the word “minute” when we say the time, but if you need to abbreviate the word minute, it would be “mn” in French.

In French, all the official schedules (TV, radio, trains, planes etc…) use what you call “military time”.

Note that we don’t say “hundred” for a round hour like you do in English: in French, we just say the hour number. But don’t forget to say the word heure(s)!

This 4+ hours audiobook goes in-depth on how to construct the numbers and how to properly pronounce them with all the modern glidings and elisions that can sometimes completely change the number from it’s written form!

I also cover many French expressions that use numbers as well as how to properly say the time and prices.

All throughout the audiobook, you will find extensive audio drills recorded at 3 different speeds and featuring numbers out of order so you really get a true workout!

4 – Time in French: Minutes Past and to the Hour

This pretty much works as in English.

Note: It’s common in French to say the minutes to the hour when you are rounding up the time ;

No one would say il est une heure moins vingt-deux.

When you need to be precise, use the minutes past the hour or the official time.

And following the same logic, you cannot use minutes to the hour with the official time.

When we are not using the official time, we use these very common expressions:

So we have our equivalents of noon and midnight :

Note that these 2 expressions do not require the word heure since their position in the day is self-implied.

I strongly recommend that you use these, since douze heures sounds a lot like deux heures when you make the liaison…

Otherwise, in official time midi is “douze heures” and minuit is “zéro heure” (no S at heure).

How To Say Quarter Past in French?

How To Say Quarter To in French?

You also want to glide your “le” as much as possible – it almost disappears in modern spoken French pronunciation.

How To Say Half Past in French?

We say “et demie “(and an half, half past the hour)

Note: we glide over the first “e” of demie = dmee in spoken French.

Let’s see more useful French time expressions. Please press play on the audio player to hear my audio recordings. I left enough time for you to repeat out-loud and I encourage you to do it!

6 – How Should I Tell the Time in French?

So, which method should you use to tell the time in French?

It’s really up to you. Pick one, stick to it when you speak… but you need to understand all of them so you understand the French when they speak to you! 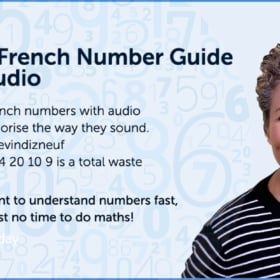